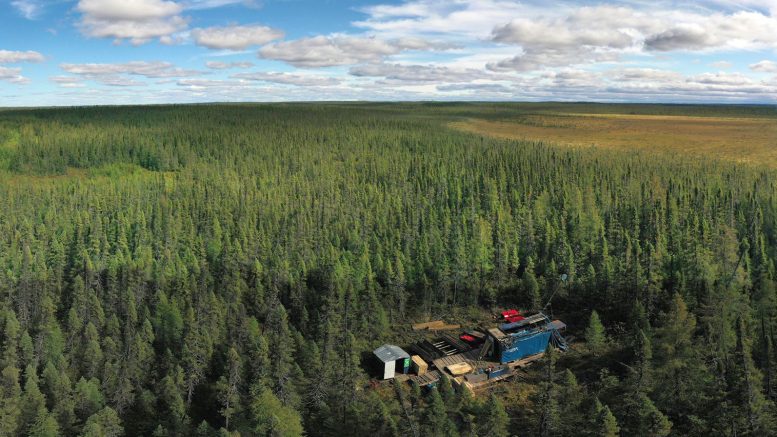 Drill rig at Fenelon Credit: VRIFY[/caption] QUEBEC – Wallbridge Mining’s drill program at the wholly owned 85.6-sq.-km Fenelon gold project has expanded the Tabasco-Cayenne shear zones by 100 metres down-plunge. In addition, infill work continues to hit high-grades near existing underground workings around the Main Gabbro shear zones and suggests near-surface zones of gold mineralization within Area 51. With 11 surface and 13 underground holes in the latest release, highlights from Tabasco-Cayenne include 9.8 metres of 4.44 g/t gold starting at 1,043.4 metres, growing this zone down-dip. The Serrano zone within the Main Gabbro area returned 19 metres of 4.88 g/t gold from 47.8 metres and 6.8 metres of 5.84 g/t gold starting at 58.3 metres. Infill drilling within Area 51 hit 3 metres of 15.73 g/t gold from 69 metres in the Andromeda zone, 38.5 metres of 1.17 g/t gold starting at 113.5 metres at the Titan area and 16.7 metres of 1.38 g/t gold from 144 metres at the Andromeda and Interstellar zones. “In addition to continuing our expansion and infill drilling in the Tabasco-Cayenne Area 51 gold system, we are very pleased with the first results of our near-surface infill drill program testing the Titan and Andromeda zones in Area 51,” Attila Pentek, the company’s VP of exploration, said in a release. Pentek added that these latest results from Area 51 indicate potential near-surface bulk targets with good continuity, suggesting an open-pittable future resource. The company has completed approximately 15,000 metres of drilling since a work suspension that ended in mid-May due to the COVID pandemic. Six rigs are now working at Fenelon and additional assays are pending. Four of the rigs are focused on the Tabasco-Cayenne-Area 51 mineralization, with 80,000 metres scheduled for completion by the end of this year. A further 20,000 metres, with two rigs, is planned for newly added Fenelon grounds from the company's acquisition of Balmoral Resources earlier this year. The Fenelon gold system lies along the Detour-Fenelon gold trend and has been defined over 2 km of strike to date; the mineralization has been traced from surface down to a depth of at least 850 metres. There are four known hosts of gold mineralization at Fenelon: the Main Gabbro shear zones, the Tabasco-Cayenne shear zones, the Area 51 corridors as well as the Reaper and Ripley zones. Wallbridge added this last area to its exploration portfolio through an all-share acquisition of Balmoral Resources, which closed in May. The company plans to release a resource for Fenelon by the middle of next year. For more information, visit www.WallbridgeMining.com.