Canada’s Iamgold (NYSE: IAG; TSX: IMG) has revealed a costs blowout at its massive Côté gold project in Ontario, with preliminary estimates […]
By Cecilia Jamasmie May 4, 2022 At 6:56 am 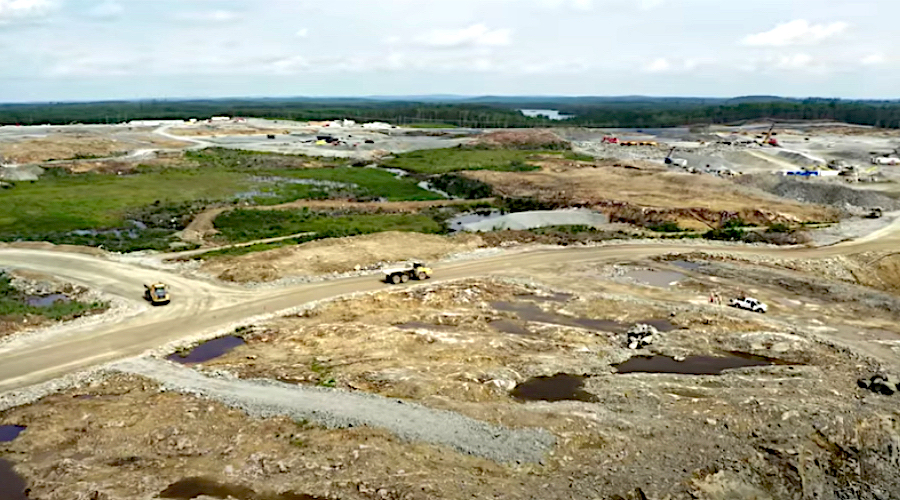 Construction at the Côté gold project in Ontario. (Image courtesy of Iamgold | YouTube.)

Canada’s Iamgold (NYSE: IAG; TSX: IMG) has revealed a costs blowout at its massive Côté gold project in Ontario, with preliminary estimates from an ongoing risk analysis indicating that development of the asset would require between $1.2 billion and $1.3 billion to complete.

That compares to the company’s previous assessment of between $710 million and $760 million needed and represents an eye popping 90% cost increase after adjusting the figure for the $78.5 million spent in the first three months of the year.

The Toronto-based miner also said its chair Maryse Belanger has been appointed interim president and chief executive to try to tackle the situation. She has taken over from CFO and executive VP of strategy and corporate development, Daniella Dimitrov, who acted as the top boss after Gordon Stothart walked away in January this year. She will focus now on finding ways to address the project’s funding gap.

Iamgold noted it had suspended its 2022 and 2023 costs guidance for the project, adding it would provide a detailed updated costs and schedule estimate before the end of the second quarter.

“This isn't entirely a surprise,” BMO analyst Jackie Przybylowsk wrote on Wednesday. “We were highly skeptical of the previous budget, but the magnitude of the increase is above our previous estimates, and this is ahead of the release of a detailed project review later in Q2/22,” she noted.

The timing of commercial production at Côté, considered a tier-one, generational asset, has also been delayed by four-to-five months from the previous guidance of the second half of 2023.

“The project is being developed with the background of covid-19, inflation and global events and their impact including on the global supply chain, labour availability, productivity and rates, costs of materials, commodities and consumables,” the company noted.

Since the beginning of the year, Iamgold has been conducting a portfolio of assets review as part of a strategy that prioritises return on investment and cash flow generation. The main goal of the exercise has been to ensure the delivery of Côté – a 70:30 joint venture with Sumitomo Metal Mining.

Iamgold, which broke ground on the project in September 2020, estimated costs at the time in the $875m-$925m range.

Côté is expected to produce an average of 489,000 ounces of gold a year in its first five years and an annual average of 367,000 ounces over 18 years of its planned mine-life. It would be the company’s fourth mine.

In terms of results, Iamgold reported first-quarter earnings of $23.8 million and $356.6 million in revenue, better than the consensus $310 million.

Experts believe the main reason for the outperformance was the timing of sales of gold inventory at its Essakane mine, in northeastern Burkina Faso.