A restart of exploration efforts is set to go ahead at the historic St. Anthony gold mine in the Kenora Patricia mining […]
By Magda Gardner December 21, 2020 At 12:23 pm 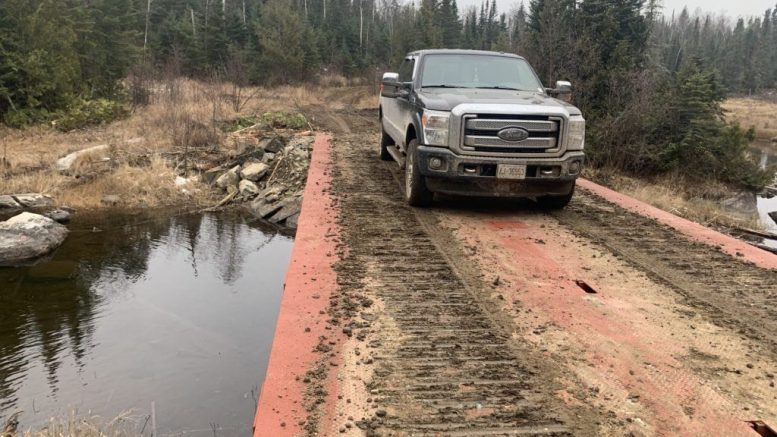 New access bridge at Maxtech's St. Anthony gold project in northern Ontario Credit: Maxtech Ventures[/caption] A restart of exploration efforts is set to go ahead at the historic St. Anthony gold mine in the Kenora Patricia mining district of Ontario, according to Peter Wilson, president of Maxtech Ventures (CSE: MVT; US-OTC: MTEHF). When the underground mine shut down in 1944, St. Anthony was the largest producing gold mine in the area. By the time it closed, the mine had produced 63,310 ounces of gold at an average grade of 5.95 grams gold per tonne. Work from the late 1800s to 1942 outlined an anomalous gold trend 17 km to 21 km long, and the past-producing St. Anthony mine sits within this corridor. Wilson is convinced that he can restore the mine’s historical bragging rights as a high-grade gold producer under his plan to infill-drill with updated methods and vault the mine from history to hot topic. “This is high-grade gold,” Wilson said. “We’ve got a great asset, great management, and great historical understanding in the area.” As demand for gold grows and the hunt heats up for junior miners with potential, Wilson is confident the St. Anthony mine is perfectly positioned to earn wealth for investors – and quickly. The mine, 85 km east of Sioux Lookout, is in a prospective location, only 60 km west, and on trend, from Great Bear Resources’ Dixie Lake discovery. St. Anthony is also near Newmont’s Musselwhite mine, and First Mining Gold’s Springpole, and it has undergone drill programs by previous owners, most recently in 2009. The infrastructure is sound, and the mine can be accessed by road, boat, and floatplane, Wilson said. [caption id="attachment_1003744232" align="aligncenter" width="400"] Drill core from Maxtech Venture’s St. Anthony mine project Credit: Maxtech Ventures[/caption] The property consists of 233 contiguous claims, totaling 4,224 hectares in the Sturgeon Lake Greenstone belt, 13 km south of Savant Lake. The project hosts two gold deposits – St. Anthony and Dawson White— and three high-grade target zones (Buckshaw, Couture Lake and Lucky Bones). Historic mining left large deposits of gold behind, according to the company, and Wilson believes that by using a wider HQ drill, drilling below the underground workings and completing more in-fill drilling, the company can prove the deposit’s worth to investors. The mine had previously been drilled to a depth of only 300 metres, and the previous owners didn’t assay for free gold, he explained. When re-assayed, the historic drill core for free gold returned between 7 and 35 times higher gold content, he said. “We are going to be walking into a situation now where we are going to drill up a resource,” he explained. “The previous samples were drilled for continuity of 2-3 grams of bulk tonnage, and they were not assaying for the free gold, and found 1 million ounces, but they drilled at 150-metre spacings. So we’re going to walk in, and twin some old holes that had up to 200 metres at 2 grams, which is 4 grams at 100 metres etcetera.” The in-fill drill program will test Zone 1 of the former mine, and along strike to the north, south, and down-dip. Wilson hopes that by drilling the deposit with modern-day equipment and tighter spacing, yields are going to jump “astronomically and create a strong 43-101 compliant resource.” In August, Maxtech formed a joint venture with St. Anthony’s owners, Magabra Resources, a private company that is active in the area and has developed long lasting strong relationships with the local First Nations communities. Wilson saw the value in the knowledge base, infrastructure, and location, and jumped on the opportunity. He believes that publicly held Maxtech will give the project the profile it deserves and enable it to raise capital to develop the asset. “The platform of a public company has the attention of international investors, whereby a private company would never have that kind of exposure,” he said. “That is the attractive nature that brought me and the current ownership together.” The preceding Joint-Venture Article is PROMOTED CONTENT sponsored by Maxtech Ventures and presented in partnership with Canadian Mining Journal. Visit Maxtech Ventures for more information.