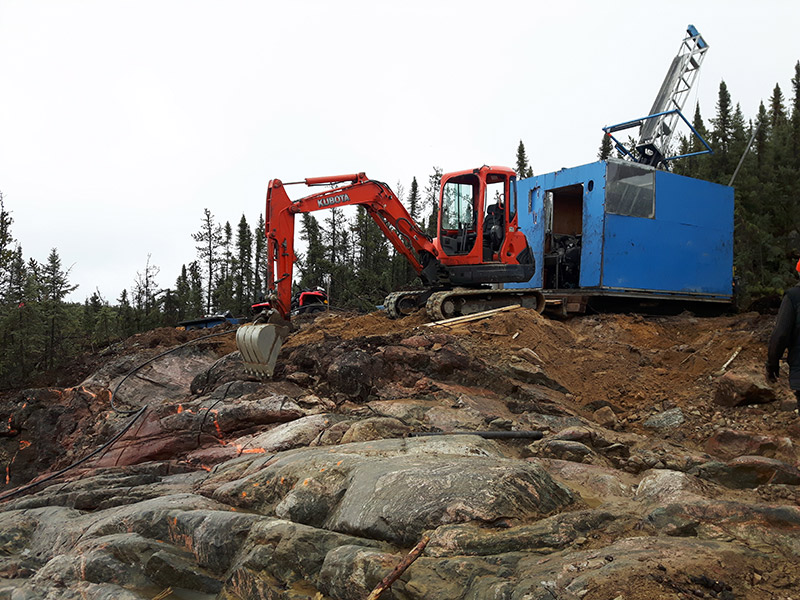 Ivan zone drill core. Credit: Appia
[/caption] The SRC and Saskatchewan’s provincial government are developing a first-of-its-kind in Canada, rare earth processing facility, scheduled to begin operations in 2022. Rare earth elements are used in industrial applications, electronics, clean energy, aerospace, and automotive industries and demand for critical rare earths material for electric vehicles is set to soar. About 80% of North America’s rare earths supply currently comes from China, and the US government, first under President Trump and continued by President Biden, has emphasized the importance of establishing domestic supply chains in North America to reduce foreign dependence. Appia’s Alces Lake Project is a 43,434 acre (17,577 hectare) property in Northern Saskatchewan’s Athabasca Basin. It is located  approximately 30 kilometres north  east of Uranium City, where last year 2,506 meters was explored in 18 drill holes, with 15 of those drill holes intersecting the REE minerals system. “Of global rare earths deposits, Alces Lake has the potential to be No. 2 in terms of grade, it’s one of the richest prospects in the world,” Tom Drivas, Appia Energy CEO said. [caption id="attachment_1003746096" align="aligncenter" width="550"] Bell outcrop. Credit: Appia
[/caption] Since detailed exploration began at Alces Lake in 2017, a total of 74 surface zones and occurrences bearing REEs, gallium and uranium over 45 kilometres of strike have been discovered on the property – and less than 1% of the property has been explored by drilling so far. Exploration has found that high-grade gallium is contained within the monazite. Monazite is one of the most important REE-bearing minerals producing REE oxides. The testing at the SRC focuses on the separation of REEs contained in the monazite and producing a mixed REE carbonate. The well-financed company has now increased its exploration budget to over three times last year's – to nearly $4 million and will double the drill program and aim for at least 5,000 metres in 2021. "Alces Lake, from what we have seen, is the second highest grade of total rare earth oxides in the world – it’s up to 49 wt% total rare earths. The average grade from our seven samples that we have so far is 16.65 wt% total rare earths. Out of that, 3.85 wt% is critical rare earths.  All of these zones are on surface, or near surface within 10-20 metres. It would be an easy mining scenario," Drivas said. Drivas said the property is comparable with mining operations that are now successfully producing REE oxides. Two REE major producers in the western hemisphere are MP Materials, which owns Mountain Pass in California and Australia’s Lynas. Drivas said Alces Lake has higher in situ REE grades than Lynas and MP Materials have. Appia has a small fraction of either of those two producers’ market capitalization. Since Appia has only looked at a small portion of the 100% owned, 43,434 acre (17,577 hectare) property with ground and airborne surveys, Appia’s exploration program this year will include a property-wide airborne magnetic, EM and radiometric geophysical survey with additional ground radiometric surveying and geological mapping. This year, Appia is ramping up exploration so they can move to development. "We feel Alces Lake meets all the criteria for a viable rare earths project. It has the right location near a processing facility and technology, the right mineralogy and the right composition. It’s high grade, and grade is king,” Drivas said. “Almost a quarter of the rare earths in Alces Lake are critical rare earths, and that critical rare earth component has about 85% of the dollar value.” Of 16 rare earths, if we extract only the two or three most valuable of them, we get 85% of the dollars." "Our goal is to become a major supplier of high grade critical rare earths in North America,” Drivas said. “We're on track." The preceding Joint-Venture Article is PROMOTED CONTENT sponsored by Appia Energy, and produced in cooperation with the Canadian Mining Journal. Visit www.AppiaEnergy.ca for more information.