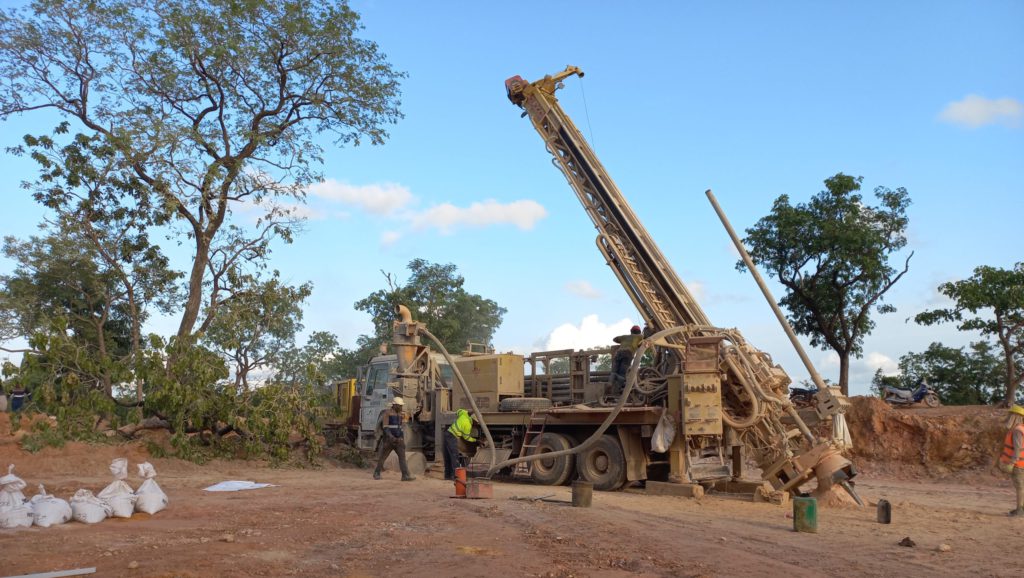 Sanu has three properties in northeast Guinea totalling 280 km2 and is building on a significant termite mound and rock chip sampling campaign that was followed by 35,000 metres of shallow auger drilling. The Daina 2 main zone RC campaign began in mid-August.

“Drilling has begun to define a moderately dipping mineralized structure intersected on the three 65 metre spaced lines drilled to date,” said Martin Pawlitschek, president, and CEO of Sanu. “As we progress through these first and subsequent phases of drilling, we will continue to test the downdip extent of the Daina 2 main zone, as well as lateral extensions along its potentially 4-km-long strike extent.”

“Using termite mound sampling and shallow auger drilling, we have defined gold bleeding out of kilometer-scale structural trends on all three permits,” said Pawlitschek, who has over 20 years experience working in West Africa – noting the company has an experienced team in West Africa and Canada.

Sanu plans on 10,000 to 15,000 metres of drilling from mid-2022 to early-2023, starting with the Daina permit followed by drilling at its Diguifara and Bantabaye properties.

“What I really love about this area is that once you have exploration permits, you can go on the ground and drill holes,” Pawlitschek said. “You don’t have to wait six to nine months for permit access to a small drill pad, which you must do in many other parts of the world. Guinea is pro-exploration, investment, and development. That doesn’t mean you behave like a cowboy. There are industry standards for environmental management and community engagement that Sanu applies.”

Mapping and sampling of artisanal gold workings have helped Sanu understand important structural trends and geological parameters. In some places, local residents strip the top layer of laterite and dig small pits – providing a convenient window into the bedrock. In most cases, though, artisanal miners dig 10- to 15-metre vertical shafts, then tunnel horizontally along paystreaks.

“The artisanal workings tend to fall within the trends we’ve mapped out,” said Pawlitschek. “They are broadly coincident, but they are much smaller scale than what we’ve defined with the geochemistry. Most of our RC drilling will take place under auger-drill defined anomalies. Although, there’s one site where we are drilling reverse circulation holes under a larger set of artisanal workings, which is right on trend with our auger anomalies.”

In terms of raising additional funds for exploration, drilling the correct targets early on is Sanu’s largest challenge.

“The size of the gold anomalies that are being outlined means the company must carefully consider prioritized targets because you only have so many dollars for exploration and drilling,” said Fiona Childe, a geologist and Sanu’s vice-president of corporate development and communications. “When you have multi-kilometre gold anomalies, you must decide where you’re going to get the best return with the meterage available.”

The company has expanded gold anomalies identified by other companies in previous exploration programs, said Pawlitschek. The prior work facilitated fundraising before Sanu’s IPO, and enabled the company to drill shortly after listing in July.

“Normally a company will spend one or two years working-up the targets before they get to drilling, which is difficult even in a good market, let alone in a challenging one,” he said. “Other than that, we are following the typical approach for West Africa. It’s the same methodology that was used to discover the Bankan deposit, which is now over 4.2-million ounces.”

Assembling a large West African land package with quality targets on reasonable terms is challenging, said Childe, noting the Sanu team has been able to advance the project rapidly and systematically.

“Having a 4.2-million-ounce discovery in the same geological area and region is very attractive in terms of Sanu’s modelling,” she said. “Being able to point to a success story like that very nearby is another incentive for people to be interested in our potential.”

The preceding Joint Venture Article is PROMOTED CONTENT sponsored by SANU GOLD CORP. and produced in co-operation with The Northern Miner. Visit www.sanugoldcorp.com for more information.