Stuhini Exploration (TSXV: STU) is exploring and developing base and precious metal projects in Western Canada, where it controls over 809 sq. km […]
By Northern Miner Staff June 9, 2022 At 12:00 pm 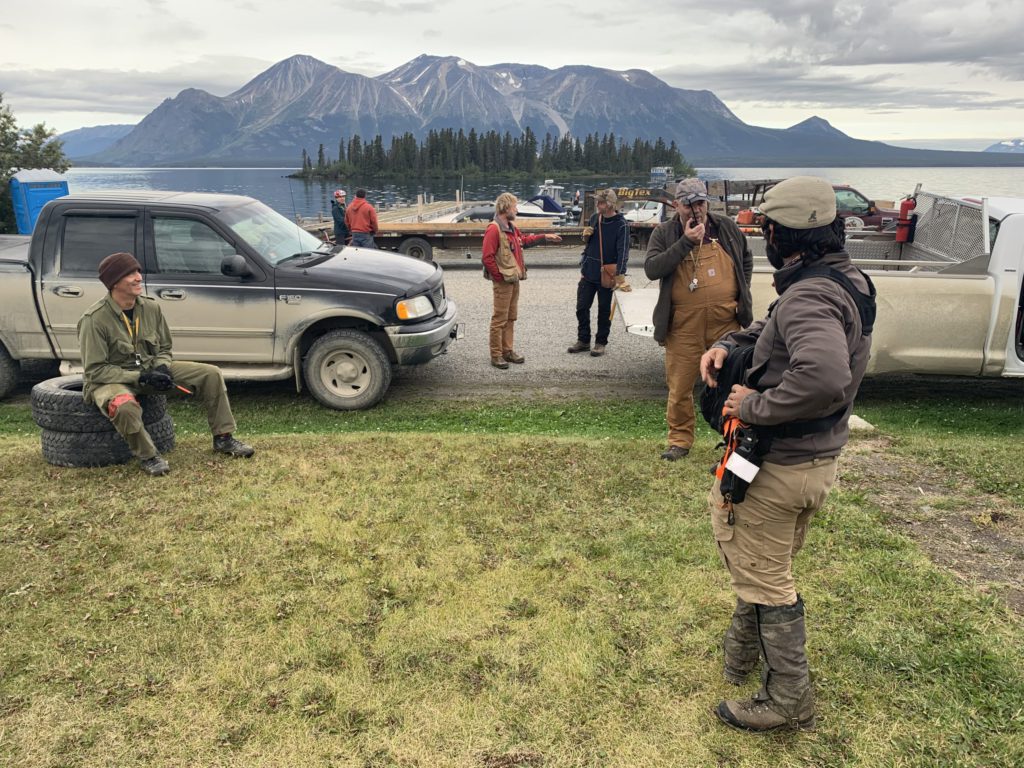 Stuhini team in Atlin preparing for another day in the field. Credit: Stuhini Exploration

Stuhini Exploration (TSXV: STU) is exploring and developing base and precious metal projects in Western Canada, where it controls over 809 sq. km of prospective mineral tenures.

The Canadian junior’s focus is on advancing its flagship Ruby Creek property in the heart of the Atlin Gold camp in northwest B.C., the largest active placer camp in Canada, approximately 15 km east of Atlin. Within the 286-sq.-km property lies the Ruby Creek molybdenum deposit.

Stuhini has an earn-in option agreement with Global Drilling Solutions to acquire 100% of the project, which Stuhini can exercise by making share and cash payments totalling 7.3 million common shares and $1.06 million over four years.

“The southwestern edge of the property is accessible by a 14 km paved road from Atlin, and the molybdenum deposit is another 20 km further into the tenures. It’s accessible by a gravel road that had a $22-million upgrade by the previous operators, Adanac Molybdenum, and the town of Atlin is about 249 km by highway to the sea-port at Skagway, in Alaska.”

Mineralization at Ruby Creek mainly consists of gold, silver, and molybdenum. The molybdenum deposit is located near the top of the property, whereas most of the gold targets occur in the vicinity of seven significant placer creeks found within the tenures. The silver occurrences cover four highly prospective targets with highest-priority target Silver Surprise, where grab samples assayed at over 16,000 g/t silver.

O’Brien says that “the advanced-stage molybdenum deposit, which remains open to depth and the southwest, was most recently developed by Adanac Molybdenum, who advanced it through feasibility, permitting, and funding and then into actual mine construction.”

He added, however, that construction of the mine was derailed by the 2008 financial crisis, which led to a collapse in the price of molybdenum, with prices falling from the low US$30 per lb. in 2007 to around US$8 per lb. by mid-2009.

“Over the past 18 months, there has been a dramatic rally in molybdenum prices, which have almost doubled from around US$10 per pound in July 2020 to just under US$20 per pound today,” says O’Brien. “In response to this price increase, we decided to re-evaluate the economics of the Ruby Creek molybdenum deposit.”

As a first step, he says the company released an updated mineral resource estimate for the porphyry deposit in March.

O’Brien says the estimate is based on a pit-constrained resource and used “a conservative moly price of US$15 per pound to model the pit, with a significant amount of the known resource lying outside this pit and that also returned some of the best historic drill intercepts.”

He noted that the proposed pit for the Ruby Creek molybdenum deposit is very shallow and sits within a gentle caldera with a high-grade core near the surface. “It’s important to begin with a starter-pit that can pay back the capital outlay quickly when you build projects on the potential scale of the project.”

Stuhini now plans to complete a preliminary economic assessment on the project to assess the deposit's economics before moving onto a feasibility study.

“As Adanac Molybdenum did a lot of the heavy lifting for us already, completing a feasibility study on the project, we won’t need to do bulk sampling or metallurgical work,” says O’Brien, adding that “most of the geotechnical drilling and the mine design have also been completed."

While most molybdenum today is used as a steel alloy, where it increases the steel’s strength, hardness, and resistance to corrosion, the silver-grey metal is considered critical for the global transition to a green energy future and is used in a wide variety of low-carbon energy generation and storage technologies.

However, according to industry experts, in the absence of recycled and recovered sources of molybdenum and with current rates of extraction from known resources, molybdenum resources could be exhausted within a century.

“Unless new resources come online, this transition away from fossil-fuel generated energy could be in jeopardy,” says O’Brien, referencing a 2020 World Bank Group report, “Minerals for Climate Action – the mineral intensity of the Clean Energy Transition,” which projects that by 2050 nearly half (47.3%) of the demand for molybdenum will come from its use in wind turbines and 41.7% from its use in geothermal energy technologies.

“These are exciting for us as we advance the project and consider various alternatives for the molybdenum deposit,” he says, adding that the Stuhini is seeking a strategic partner “who has the financial and technical ability to build a world-class mine of this scope.”

The company’s other property in B.C. is the 100%-owned 50.9-sq.-km Big Ledge zinc project, approximately 57 km south of Revelstoke. It holds a 100% interest in the 475.1-sq.-km South Thompson nickel project in Manitoba, 35 km northwest of the town of Grand Rapids, and has an option on the 42.4-sq.-km Que gold-zinc project in the Yukon Territory, about 70 km north of Johnson’s Crossing.

The preceding Joint Venture Article is PROMOTED CONTENT sponsored by STUHINI EXPLORATION and produced in co-operation with The Northern Miner. Visit www.stuhini.com for more information.