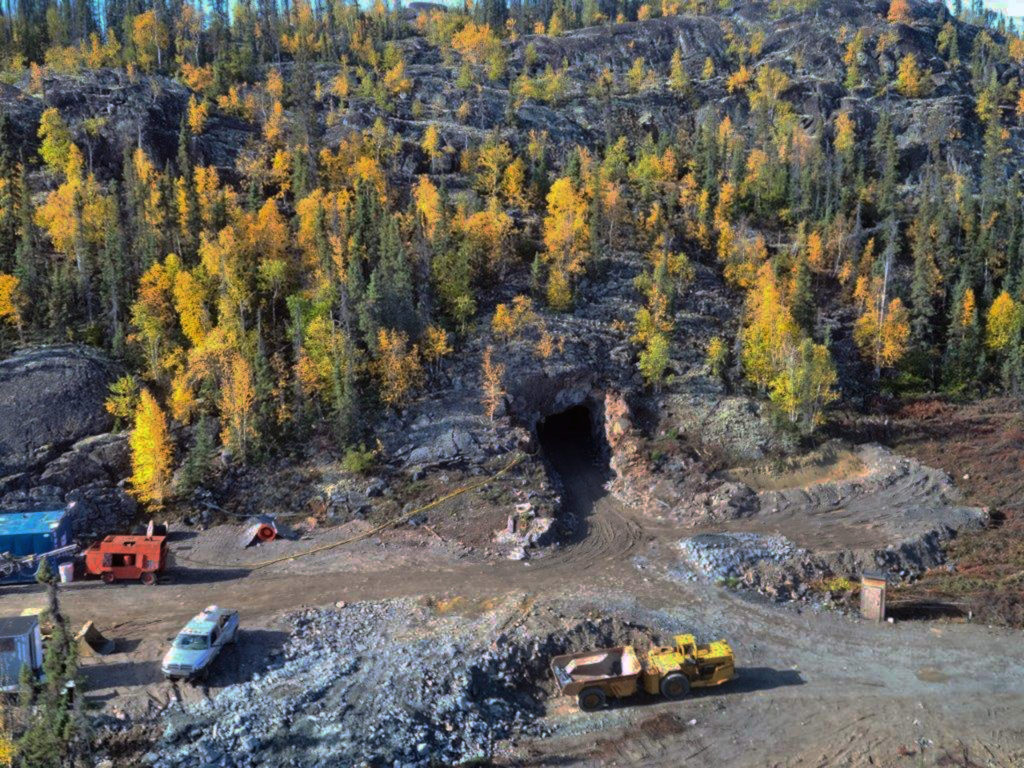 When Dave Webb acquired an option in 1988 from Cominco to earn a 100% stake in the Mon gold project, 45 km north of Yellowknife, the geologist and engineer rolled up his sleeves and got right down to work.

Within a year he brought in some underground mining equipment and put a ramp into the hillside, extracting 2,300 tonnes of mineralized material grading 26 g/t gold, which was processed at a custom mill, he says. That work earned him 100% ownership in the project.

Over the next seven years, Webb and his partners, who financed production in exchange for a royalty, extracted a 15,000 tonne bulk sample from multiple adits during the summer months, ultimately recovering 15,000 oz. of gold.

“We went in at the base of the hill and mined it up hill,” recalls Webb, whose PhD focused on gold mineralization in the Yellowknife Greenstone Belt. “We did that from two stopes that extend to 15 metres below surface. That’s very shallow, but historic drilling showed that the veins continued below the old stopes.”

Bulk sampling came to an end in 1997, when Mon’s permits to mine and mill a 100-tonne-per-day operation were closed and at the same time, the gold price dropped to under US$300 per tonne.

Webb renewed the licences in 2013 and 2014, drilled five holes (379 metres) in 2016 that he says confirmed mineralization below the mined out stopes in Mon’s A-Zone, and received another five-year renewal in December 2020, which allows the company to operate at 100 t/d until 2025.

In the meantime, he optioned his privately held 622-hectare project into a company called Sixty North Gold Mining (CSE: SXTY; US-OTC: SXNTF), which IPOed in April 2018, drove a ramp 17 metres below the base of the hill and deeper than the past-producing stopes, and now plans to undertake a third bulk sample of between 30,000 and 40,000 tonnes starting in 2022.

“We plan to mine up to that much in 2022 but we will only bring to surface around one-tenth of that,” Webb says. “Shrinkage stopes require broken muck to remain in the stope for ground support and a working platform. We can only remove up to one-third of the tonnage mined until the stope is completed.”

He also notes that Sixty North won’t have a mill on site until 2023, and with underground temperatures around -5 degrees Celsius, that means any rock brought to surface will see -30 to -40 degree temperatures over the winter. “That frozen rock takes many weeks to thaw before it can be put though a mill,” he says.

In the interim, Sixty North has signed contracts for construction of a winter road, and will bring in fuel, more explosives and miscellaneous equipment.

“We’re going to complete development down to about 24 metres below the old stopes and will develop one to three stopes in the vein,” says Webb.

Webb notes that the company has decided to forego completing a 43-101 compliant resource estimate on the Mon project for now, because, like many gold deposits in the Northwest Territories, Mon’s geology is complex due to its “high-grade” and “nuggety” nature.

He points out that 32 historic drill holes by Cominco and two other companies at Mon, have defined grades below historic stopes ranging from zero all the way up to 52.45 g/t gold over 2.7 metres.

“Although there is a risk that the vein material that has been encountered in the historic drill holes does not yield economically recoverable gold, we feel that the history of the Yellowknife Gold Belt demonstrates production grade can exceed that defined by drilling,” he says. “We are also aware that all of the gold mines in the Yellowknife Gold Belt commenced production at rates under 250 t/d — the Con, Negus and Discovery mines accounting for 7 million oz. of past production, all started at 100 tonnes per day.”

Webb notes that the size, grade and form of mineralization as well as its host rock assemblage at Mon is similar to the Discovery mine, 50 km to the north, and now owned by GoldMining Inc. (TSX: GOLD; NYSE-AM: GLDG) and part of that company’s Yellowknife gold project. The Discovery mine, Webb says, mined 1 million tonnes of mineralized material and recovered 1 million oz. of gold between 1949 and 1969.

“This is a great place to look for gold,” he says of the Yellowknife Gold Belt, “and a number of companies put mines into production without having reserves and we feel we have another one.”

“If we went in with a drill program we would spend about $45 to $50 to find each ounce of gold and no one cares about a deposit until you’re at 100,000 ounces, so we’d have to put $5 million to $6 million into it to come up with a resource, but we can actually put it into production at 100 t/d at the same price,” he continues.

“It’s all underground, high-grade, narrow width mining, and we believe, although we can’t prove it, that the 30,000 to 40,000 tonnes of vein material will yield 30 g/t gold,” he says. “We’ll replicate what we have done in the past, but we’ll be doing it with better equipment and technologies, and younger men. People will eventually accept what we’re doing by watching us do it.”

Management and insiders own about 17% of the junior explorer and a number of private investors hold another 20%. At presstime in Toronto the company’s shares were trading at 4¢, within a 52-week trading range of 3¢ and 8.5¢.