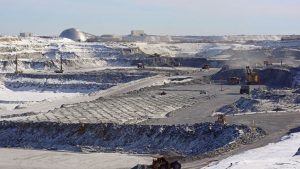 Kirkland Lake Gold has released assay results for eight drillholes, as well as one wedge hole, completed within the underexplored Saddle zone, between the Main and West pits at the Detour Lake mine site. According to the company, the results from this area to date suggest “a broad and continuous corridor of mineralization extending between the West and Main pits and to a depth of up to 820 metres below surface.”

The drill results include intercepts from the west, central and east portions of Saddle.

The central portion of Saddle returned assays that include 142 metres of 1.1 g/t gold starting at 739 metres – this hit is from the very first hole targeting this area, and returned mineralization similar in style and grade to the West and Main pits. These results indicate an 800-metre corridor of mineralization, which would follow the DMT and extend from the Main through to the West pit and then to the west, beneath the West pit.

In the press release, Tony Makuch, Kirkland Lake’s president and CEO, noted the potential for a larger deposit at the Saddle zone, with underground mining possibilities.

“Results from drilling in the Saddle zone have included numerous intersections containing attractive grades over substantial widths, which highlight the potential for significant growth in open-pit mineral resources and are also supportive of a potential underground mining concept, which could add higher-grade mill feed to our production profile.”

Exploration work at the mine site is ongoing – the latest results are the second batch of data from a 250,000-metre exploration program. Kirkland Lake plans to drill at least 75,000 metres by year-end.