A preliminary economic assessment from Labrador Iron Mines Holdings (OTC: LBRMF) on its 52%-held Houston project on the Labrador-Quebec border suggests a […]
By Canadian Mining Journal Staff March 9, 2021 At 12:35 pm 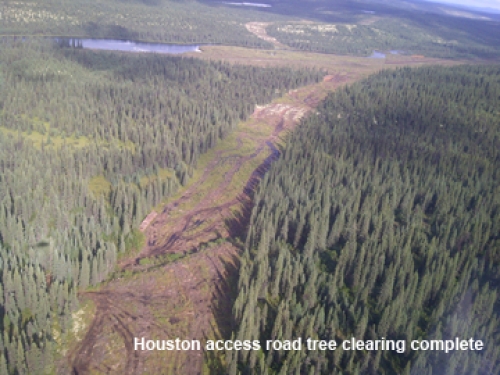 With a year-round mining rate of 5,500 t/d, the material, after on-site crushing and screening, would be loaded onto trains, at 10,000 t/d, between May and November. The PEA assumes sale of the iron product at the Houston rail siding - the sale price realized is assumed to include additional shipping charges and price participation costs by the off-taker at iron ore prices above the US$90 per dry metric tonne assumed as the base case benchmark iron price in the PEA.

Using the US$90 per tonne iron ore price assumption, and with total operating costs pegged at US$24.63 per dry metric tonne sold and an initial capital cost estimate of $86.8 million, the after-tax net present value estimate for the project stands at $109 million, with a 39% internal rate of return and a 2.6-year payback.

According to chair and CEO John Kearney, Houston is construction-ready as the deposits scheduled for initial production have gone through the permitting process.

“With an 18 month construction period, the Houston Project has very low technical risk, with only a short gravel road and rail siding as the principal construction components,” Kearney said in a release.

The executive also added that, using current market prices (at US$160 per tonne of iron ore), Houston would “yield spectacular financial results.”

Houston consists of three iron deposits in Newfoundland and Labrador and one deposit in Quebec – two of the Quebec deposits are permitted. Measured and indicated resources at the property total 20.5 million tonnes grading 62.7% iron with an additional 14.3 million inferred tonnes grading 59.4% iron.

The required mine development includes an 8-km gravel road and a 2-km rail siding, in addition to site infrastructure. Labrador Iron has impact and benefit agreements in place with five First Nations communities.

Houston products are expected to consist of 30% lump iron ore and 70% sinter iron ore. The study assumes that the US$90 per tonne realized price for the 62% iron material will reflect a buyer’s adjustment of US$52 per dry metric tonne for rail and port costs, ocean shipping, value-in-use adjustments and a price discount for the off-taker.

The release also notes that Labrador Iron Mines has ‘substantial’ tax pool balances, which are expected to shelter the profits realized over the entirety of the 12-year base-case mine model from most federal and provincial taxes.

Between 2011 and 2013, Labrador Iron Mines produced 3.6 million dry metric tonnes of iron ore that was sold into the China spot market.

According to the company’s most recent financial statements, a non-controlling interest holds 48% of Labrador Iron Mines.