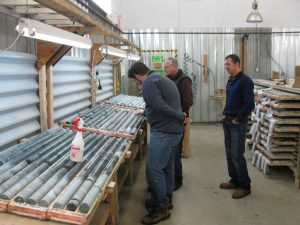 Drill results from the Central zone at Argonaut Gold’s 100%-held past-producing Magino gold project in Ontario hit high-grade gold intervals, which suggest potential for a connection with the Elbow zone to the west.

The company’s most recent release includes assays for seven holes – these hit gold below, and next to, the proposed Magino pit shell. Drill highlights include 9 metres of 13.4 g/t gold from 476 metres; 3 metres of 46.8 g/t gold starting at 307 metres; and 17 metres of 4.1 g/t gold from 406 metres.

According to Pete Dougherty, Argonaut’s president and CEO, the most recent holes suggest continuous high-grade mineralization at the Central zone, similar in nature to that defined within the Elbow zone at Magino. Dougherty added that the company believes there is potential for a connection between the Elbow and Central zones, which it intends to test.

This most recent drilling was aimed at testing the continuity and depth extent of the Central zone, a steeply dipping shoot with high-grade gold veins within a broad halo. Results to date suggest good continuity of the high-grade mineralization, which currently extends down to at least 750 metres.

Brian Arkell, the company’s VP of exploration, added that the drilling was also designed to offset a prior, high-grade intercept from the Central zone.

“We are very pleased to see similar gold mineralization plus gangue minerals, deformation, and alteration when compared to the Elbow zone. These assay results suggest continuity of high-grade gold mineralization exists between the Elbow and Central zones and will be the focus of further drilling to test this theory,” Arkell added in the press release.

Argonaut has also identified additional high-grade structures for follow-up at depth – these fall both within and outside of the current resource model and are west of the Elbow and Central zones.

Argonaut previously indicated that it believes that the Elbow zone is an extension of the Lochalsh zones from Alamos Gold’s adjacent Island gold mine.

A 2017 feasibility study for the project outlined a 10,000 t/d open pit operation with a 17-year mine life, producing an average of 150,000 oz. of gold in the first five years of operation. With a preproduction capital cost of US$293 million, the project net present value estimate, at a 5% discount rate, came in at US$288 million.