Maritime Resources has reported drill results from its past-producing Hammerdown gold project, which returned gold intersections within the proposed pit shell, outside […]
By Magda Gardner September 24, 2020 At 12:53 pm 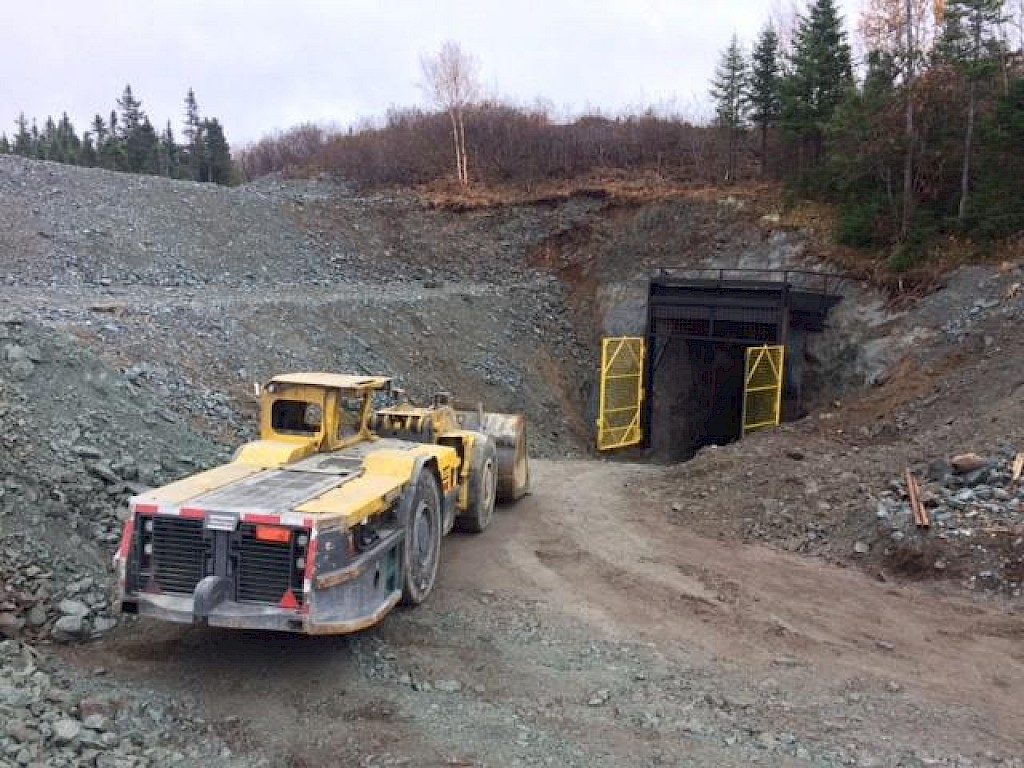 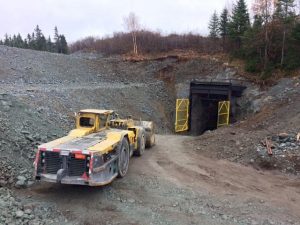 Mine portal Credit: Maritime Resources[/caption] Maritime Resources has reported drill results from its past-producing Hammerdown gold project, which returned gold intersections within the proposed pit shell, outside of existing resources, and high-grade hits below the pit shell. Drilling targeting the Wisteria zone at the Hammerdown deposit, at the intersection of two faults, returned mineralized intercepts within pit outlines suggested in the company’s preliminary economic assessment for the project from February, but outside of the current resource blocks. Results from this Wisteria include 31 metres of 2.9 g/t gold and 1.24 g/t silver from 25 metres; 25.2 metres of 1.62 g/t gold and 0.58 g/t silver starting at 43.6 metres; and 20 metres of 1.55 g/t gold and 0.4 g/t silver from 9 metres. Mapping is ongoing at Wisteria, with additional drilling planned as well. These latest intercepts are from the south side of the pit shell, and, from the release, they “present an exciting opportunity for a bulk tonnage resource in this area.” Drilling below the proposed Hammerdown pit shell returned a high-grade intercept, with 4.7 metres of 15.44 g/t gold and 1.39 g/t silver from 94.3 metres – this includes a 0.2-metre long section of 354.8 g/t gold and 30.1 g/t silver. According to Maritime, this 0.2-metre section is the fifth-highest grade gold intercept ever recorded at Hammerdown and is interpreted to be a new vein outside of current resources, below the pit shell. Additional drilling is planned for this area. Infill drilling at the Orion deposit returned visible gold within a 7.6-metre interval of 2.25 g/t gold and 0.72 g/t silver from 39.3 metres, which includes 0.2 metres of 37 g/t gold and 4.6 g/t silver, from a drilhole targeting near-surface extensions of this deposit. “Maritime’s exploration program at Hammerdown continues to demonstrate the high-grade nature of the project, including the new Wisteria zone, where drilling has intersected wide intervals of gold and silver mineralization outside of the current mineral resource and within the PEA open pit shell,” Garett Macdonald, Maritime’s president and CEO, said in a release. “These results are very encouraging and introduce a new chapter at the project that is different than the narrow vein system that is normally encountered.” Macdonald added that Maritime has completed its initial, 10,000-metre infill and grade control program and started a second, 10,000-metre phase of drilling, with exploration targets across the Hammerdown gold project and Whisker Valley area – two rigs are active at the property. The Hammerdown project, within the greater 98-sq.-km Green Bay property, includes the past-producing Hammerdown and Orion deposits and features a 5-km mineralized trend. The Whisker Valley area, 10 km north of Hammerdown, features similar high-grade veins. Maritime wholly owns Green Bay; Richmont Mines operated the Hammerdown deposit between 2000 and 2004, and produced 143,000 gold oz. during that time from an average mine head grade of 15.7 g/t gold form open pit and underground mining. Combined open-pit resources at Hammerdown and Orion stand at 1.7 million measured and indicated tonnes grading 6.65 g/t gold for a total of 368,000 oz. Inferred resources add a further 1.3 million tonnes grading 4.77 g/t gold for 206,200 gold oz. Total resources across the two deposits in the underground classification include 1.2 million measured and indicated tonnes at 4.13 g/t gold for a total of 153,000 oz. with an additional 1.9 million inferred tonnes grading 4.29 g/t gold containing 260,000 gold oz. In February, Maritime published the results of a preliminary economic assessment on open pit and underground mining at the Hammerdown and Orion deposits. The material mined would be pre-concentrated on site and hauled to an offsite mill to produce gold doré. The 9-year mine would produce an average of 57,900 gold oz. annually at all-in sustaining costs of US$939 per oz. With a pre-production capital cost estimate of $57 million, the resulting after-tax net present value estimate for the project, at a 5% discount rate, came in at $142.1 million with a 61.2% internal rate of return. Maritime is working towards an updated resource estimate and a feasibility study for the project. For more information, visit www.MaritimeResourcesCorp.com.