Moneta Porcupine Mines has released a positive preliminary economic assessment (PEA) for the South West deposit at its Golden Highway project, near […]
By Alisha Hiyate September 9, 2020 At 12:38 pm 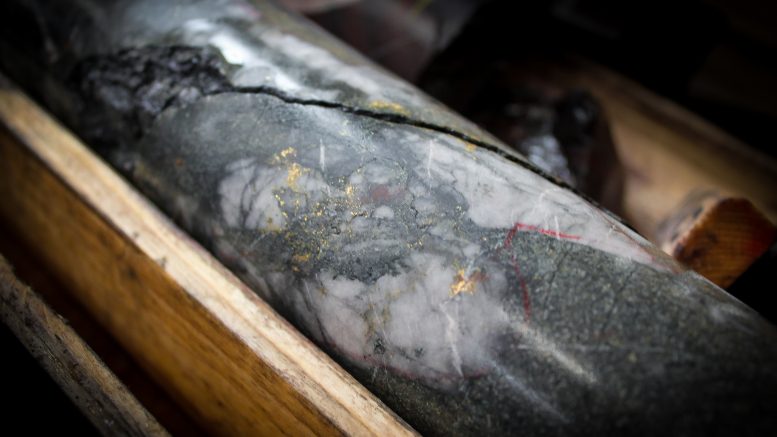 Core from the South West deposit at Moneta Porcupine's Golden Highway project near Timmins, Ont. Credit: Moneta Porcupine[/caption] Moneta Porcupine Mines has released a positive preliminary economic assessment (PEA) for the South West deposit at its Golden Highway project, near Timmins, Ont. The study looks at a 1,750 t/d underground mine that would produce an average of 76,000 oz. gold per year over a mine life of 11 years at all-in sustaining costs of US$747 per oz. Mining would be via ramp access, using longitudinal longhole stoping methods. With an initial capex of $144 million and sustaining capital of $136 million, the project has an after-tax net present value (NPV) of $236.4 million, using a discount rate of 5%. The internal rate of return (IRR) is estimated at 29.7%, with a payback period of 3.4 years. Over its mine life, the project is expected to generated after-tax cash flow of $371 million. The study used a conservative base case gold price of US$1,500 per oz. and an exchange rate of US77¢. In addition to an owner operated mine and mill scenario, the study also looked at a toll milling option, which would lower the initial capex to $64.5 million, the NPV to $197 million and increase the IRR to 43.8%. In a release, Moneta Porcupine CEO Gary O'Connor said that the project's "excellent" economics are afforded by its location in the prolific Timmins gold mining camp, and the existing infrastructure and experienced workforce. “We will now be able to focus on expanding the adjacent deposits and discovering new zones of gold mineralization to continue to add value to the Golden Highway Project with a growing resource base," he added. In addition to the South West deposit, Golden Highway hosts five other deposits and three new mineralized areas – Westaway, Halfway and South Basin. A maiden resource for Westaway is planned for this year. Next steps for Moneta will include an infill drill program to upgrade the resource at South West. At a cutoff grade of 2.6 g/t gold, South West currently holds 4.5 million indicated tonnes grading 4.07 g/t gold for 592,400 oz. gold, and 9.6 million inferred tonnes grading 4.01 g/t gold for 1.2 million oz. Total resources at Golden Highway's six deposits are 5.1 million indicated tonnes 4.12 g/t gold for 676,900 oz. gold and 10.8 million inferred tonnes grading 4 g/t gold for 1.4 million oz. For more information, visit monetaporcupine.com.