Barrick Gold’s founder and chairman emeritus, Peter Munk, passed away Wednesday, peacefully and surrounded by his family at the age of 90. […]
By Robert Seagraves March 28, 2018 At 4:40 pm 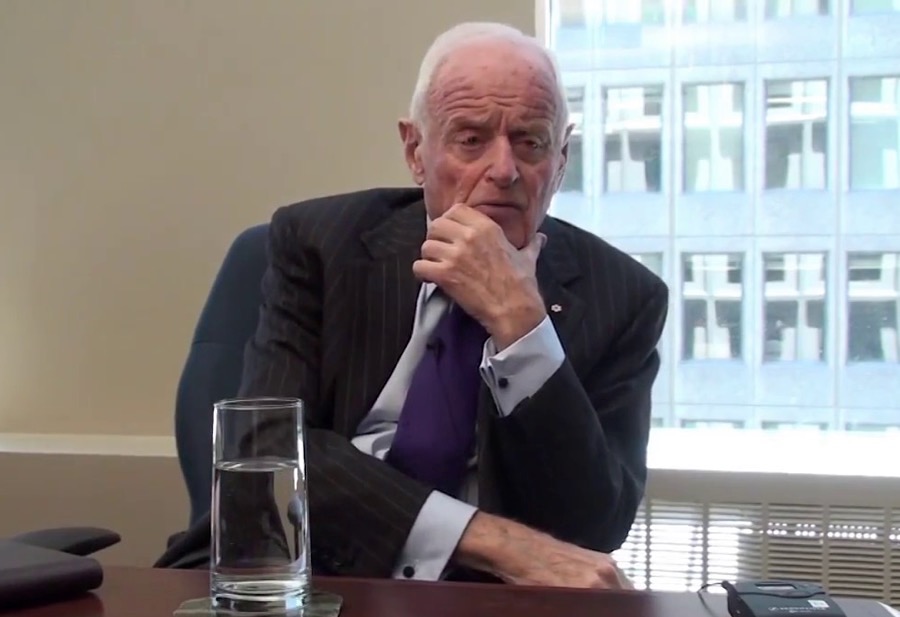 Barrick Gold's founder and chairman emeritus, Peter Munk, passed away Wednesday, peacefully and surrounded by his family at the age of 90. [caption id="attachment_1003722584" align="alignnone" width="428"] Peter Munk interviewed by Canada Science and Technology Museum. (Image: Screenshot via YouTube.)[/caption] Munk founded his most significant venture, Barrick Gold Corp., in 1983 and built it into the world’s largest gold mining company in less than twenty-five years. He did so by leading a small team of partners who trusted one another implicitly and who together balanced boldness and prudence in the pursuit of fierce entrepreneurial ambitions. Having come to the industry as an outsider, Munk defied its conventions and implemented an innovative hedging program that helped to propel Barrick to success. As the Canadian Mining Hall of Fame, which inducted Munk into its ranks in 2002, noted: “He transformed the industry that made him a titan into something it had never been before—a financially sophisticated business able to compete with other industries for investment capital.” One of Canada’s most significant philanthropists, Munk donated nearly $300 million to causes and institutions that were close to his heart. With his wife, Melanie, he established the Peter Munk Cardiac Centre at the Toronto General Hospital in 1997. Munk donated more than $175 million to the institution, including a $100 million contribution in 2017 that remains the largest single gift ever made to a Canadian hospital. It has become Canada’s premier cardiac centre, treating approximately 163,000 patients a year. To his alma mater, the University of Toronto, Munk gave $47 million to create what has become Canada’s preeminent degree-granting institution for the research and study of global affairs, the Munk School of Global Affairs. In 2008, he founded The Munk Debates, which quickly became Canada’s most important public policy debate series, bringing the world’s brightest minds together to debate the biggest issues of our time. For his leadership as an entrepreneur and philanthropist, Munk received numerous awards and honors, including honorary doctorates from the University of Toronto, Concordia University, Bishop’s University, and the Technion-Israel Institute of Technology. In 2008, he was named a Companion of the Order of Canada, the country’s highest civilian honor, limited to no more than 165 living Canadians at any one time, which he cherished. In 2017, he was among 18 global business leaders chosen to be included on the New York Stock Exchange Wall of Innovators, alongside Warren Buffett, Jamie Dimon and Jack Ma. In a remark that captured the two leading pursuits of his life—business and philanthropy—Munk noted: “You can create wealth. You are entitled to the joy of this creation. But ultimately society makes it possible, and this wealth should flow back to society.” Peter Munk was born into a prosperous Jewish family in Budapest in 1927. When the Nazis invaded Hungary in 1944, he escaped with his family to Switzerland on the Kastner train, ultimately arriving in Toronto in 1948 at the age of 20 with nothing but a small suitcase. An immigrant with neither social connections nor a command of English, Munk nevertheless felt welcomed by Canadians, and he would go on to profess a lifelong love of his adoptive country. He insisted throughout his tenure as Barrick’s Chairman that the company remain headquartered in Toronto. In 2011, he remarked, “Canada’s inclusiveness is vital: it is a characteristic of overwhelming value and importance and distinguishes Canadians from anybody else. This is a country that does not ask about your origins but concerns itself with your destiny.” While his loyalties were national, his ambitions were global. He pursued them with audacious vision and a relentless internal drive that would become his trademarks. He started his first company while he was an undergraduate at the University of Toronto, employing fellow students to sell Christmas trees outside 17 Toronto supermarkets. After graduating from the University with a degree in Electrical Engineering, he formally entered business in 1957 with $3,000 from his then father-in-law, William Jay Gutterson. Peter Munk Associates built custom-made hi-fi sets for wealthy clients and within a year, in partnership with David Gilmour, was reborn as Clairtone Sound Corporation. Combining mid-century Scandinavian design with high-end stereo manufacture, Clairtone’s stereo consoles became immensely popular, won design awards, and gained endorsements from Frank Sinatra and Oscar Peterson. Soon, however, the company grew too big too quickly, and eventually collapsed. The experience was pure Munk, only doubly so: spurred by a rapturous desire to pursue what seemed impossible, yet in its very failure raising that desire to even greater heights of sweet ache. “Clairtone was my first love,” he told author Peter Newman. “It was my first infatuation with the romance of business. It was unrequited, it was immensely uncompleted, and that’s why it made such a major impression on me. But it was an experience that formed the foundation of everything that I have accomplished in my life.” Upon that foundation, Munk went on to build a hotel empire in the South Pacific, create a highly profitable real estate investment trust, and pursue new ventures in oil and gas. No matter the business, he was known and admired for his signature panache, an incisive strategic mind, and an abiding respect for people from every station. In his third and most illustrious act, Munk turned to gold. Beginning in 1983 with modest investments in two small mines in Ontario and Québec, he and his partners, including Bob Smith, the legendary mining engineer, grew Barrick into the world’s largest gold miner in less than a quarter century. As the journalist Nina Munk wrote of her father: “The more impossible the situation, the more single-minded he becomes.” In Munk’s own words, Barrick is “a miracle not to be repeated. It will go down in the annals of business history.” Munk is survived by Melanie, his wife of forty-five years; by his children, Anthony, Nina, Marc-David, Natalie, and Cheyne; and by his fourteen grandchildren. His memory lives on with more than 10,000 Barrick employees on five continents, as well as the countless individuals and communities he touched through his philanthropy in Canada and around the world. In lieu of flowers, Barrick noted that donations may be made to the Peter Munk Cardiac Centre. Full text and images of the obituary can be found at www.barrick.com.