Researchers call for science-based policies given impacts of mining on salmon, trout

Researchers at the University of Alaska Fairbanks are calling for more complete and transparent science to inform mining policy, particularly when it […]
By Staff Writer July 6, 2022 At 9:06 am 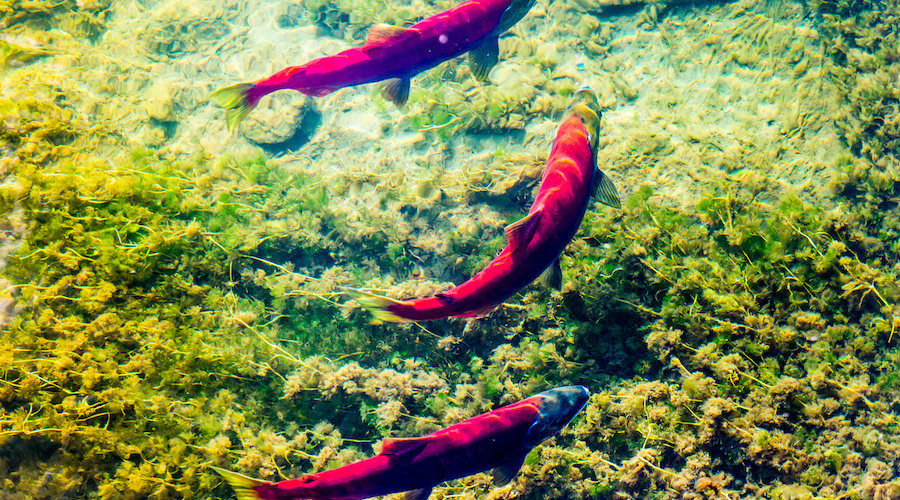 Migrating sockeye salmon approach their spawning grounds on a tributary of the Copper River. (Image courtesy of the University of Alaska Fairbanks).

Researchers at the University of Alaska Fairbanks are calling for more complete and transparent science to inform mining policy, particularly when it comes to the impact of metal and coal mines on salmon and trout in northwestern North America.

In an article published in the journal Science Advances, the scientists comprehensively link, for the first time, mining policy to the current understanding of watershed ecology and salmonid biology.

“Our paper is not for or against mining, but it does describe current environmental challenges and gaps in the application of science to mining governance. We believe it will provide critically needed scientific clarity for this controversial topic,” lead author Chris Sergeant, said in a media statement.

For the study, Sergeant and his co-authors integrated and reviewed information on hydrology, river ecology, aquatic toxicology, biology and mining policy. Their assessment maps more than 3,600 mines throughout Montana, Washington, British Columbia, the Yukon and Alaska. The size of the mines ranges from family-run placer sites to massive open-pit projects.

The research shows that, despite impact assessments intended to evaluate risk and inform mitigation, mines continue to harm salmonid-bearing watersheds through contaminants, stream channel burial and streamflow alteration. Silt suffocates eggs, and embryos may not survive contaminated groundwater. Heavy metals compromise a salmon’s sense of smell, which affects their ability to react to predators and find their way back from the ocean to spawn.

The scientists point out that even though not all mines pose the same level of risk, the review showed that the harm caused by mining can be severe and long-lasting.

“The extent of mining pressures on these watersheds underscores the importance of accurately assessing risk to water, fish and communities,” Sergeant said.

The paper also describes how some mining policies do not account for the breadth and length of mining impacts on the environment or the increasing effects of climate change.

“The crux of the issue is that salmon use so much of the watershed during their life cycle. They move throughout watersheds, whereas the impact assessments of mining projects tend to be very locally focused, and they don’t sufficiently consider all of the compounding and downstream effects of mining,” co-author Megan McPhee said.

According to McPhee, some impact assessments don’t fully evaluate the infrastructure required to operate a mine, such as roads, electricity generation and water removal.

“Another thing is that most mines, after closure, have to be mitigated in perpetuity. That’s a problem because most corporations aren’t structured that way. Also, most mitigation strategies don't take into account environmental change, including permafrost melting, and climate change-induced flooding,” she said.

Moving forward, the authors highlighted four key issues that will be foundational to modern, science-based risk assessment and mitigation, beginning with understanding stressor complexity and uncertainty. Stressors include impacts such as altered hydrology and temperature, habitat modification and loss, and pollutants.

Other key issues are accounting for the cumulative effects of mining activities across a mine’s life cycle, developing realistic mitigation strategies and recognizing the potential for climate change to magnify risk.