RING OF FIRE: Ontario to move ahead with north-south road

TORONTO – Ontario Premier Doug Ford and Greg Rickford, minister of Northern Development and Mines and Indigenous Affairs were at the Prospectors […]
By Alisha Hiyate March 5, 2020 At 12:20 pm 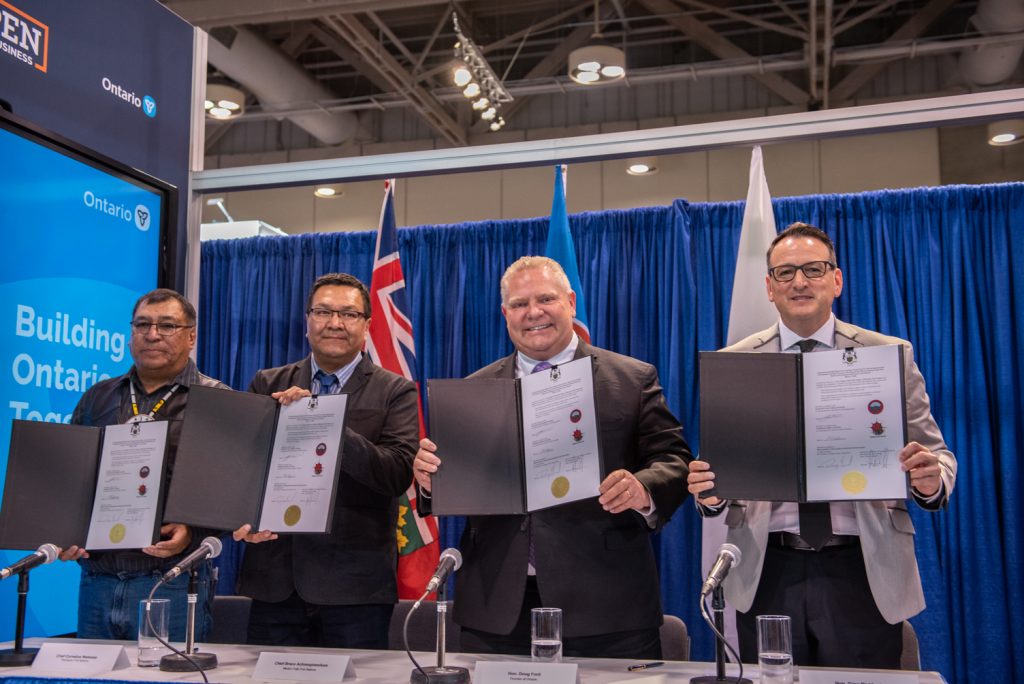 Webequie First Nation Chief Cornelius Wabasse, Marten Falls First Nation Chief Bruce Achneepineskum, Ontario Premier Doug Ford, and Energy, Northern Development and Mines and Indigenous Affairs Minister Greg Rickford at PDAC. Credit: Government of Ontario[/caption] TORONTO – Ontario Premier Doug Ford and Greg Rickford, minister of Northern Development and Mines and Indigenous Affairs were at the Prospectors and Developers Association of Canada convention this week to announce a new agreement with two First Nations in the Ring of Fire to plan and develop a north-south road into the remote region. The Northern Road Link, an all-season road that would connect the Marten Falls community access road at the south end to the proposed Webequie supply road at the north end, is supported by the Marten Falls and Webequie First Nations. Marten Falls Chief Bruce Achneepineskum and Webequie Chief Cornelius Wabasse were both on hand for the signing ceremony. The Ring of Fire, which lies about 500 km northeast of Thunder Bay, hosts chromite, nickel-copper-platinum group elements and other mineral deposits. The most advanced project is Noront Resources' Eagle's Nest nickel-copper-PGE project. Last year, the provincial government decided to scrap the previous Liberal government's approach to development, which was based on a regional framework agreement, because of slow progress. Instead, Ford's Progressive Conservatives are pursuing agreements with individual communities. "After 15 years of delay by the previous government, we said we would build a road to the Ring of Fire, and we are working with our incredible partners in the Marten Falls First Nation and Webequie First Nation to do just that and make sure we do it right," said Ford in a release. The government noted road access will improve access to health and social services for First Nations communities in area, and put in place improved infrastructure, such as high-speed Internet and reliable cellular service. (In October, the province announced a $30-million investment to provide modern broadband communications infrastructure to five Matawa member communities: Nibinamik, Neskantaga, Eabametoong, Marten Falls and Webequie.) Both Achneepineskum and Wabasse noted in a release that they are in favour of sustainable development and the new opportunities it will bring to their communities. "Marten Falls First Nation takes seriously our right to make decisions for the betterment of our community," said Chief Achneepineskum of Marten Falls. "We are moving ahead with this agreement so all communities in the region can connect to the next phase, which is to secure and bring good-paying jobs in mining, construction and other skilled trades to our communities," "We have been working together with Ontario for many years to reach this point,” said Webequie Chief Wabasse. “We believe that road development will help bring prosperity to communities across the region and better infrastructure - both on and off-reserve. We understand that road development will impact our traditional territories but believe this is a positive step forward to unlocking new opportunities that will benefit all surrounding First Nation communities." However, not all First Nations in the Ring of Fire area are on board. Some support an east-west link that was originally proposed by Noront. The chiefs of the Lac Seul, Cat Lake, Slate Falls, and Kitchenuhmaykoosib Inninuwug First Nations are part of the East-West Ring of Fire Road Coalition, as are the mayor of Sioux Lookout, as well as Morgan Fuels, Perron Contracting and the Sioux Lookout Friendship Accord. And Neskantaga Chief Chris Moonias has said the proposed north-south road bisects the core of his community's territory and warned that its consent is needed for any development. While Noront Resources originally supported the east-west road, the company's president and CEO Alan Coutts said in a statement that he was encouraged by the agreement. “Completion of an all-season road offers benefits to both industry and local communities. It will provide access to the Ring of Fire and enable mineral development,” Coutts said. “It will also bring much-needed all-season access to these communities and improvements to health and social services, high-speed Internet and cellular service for local communities.” Coutts said Noront will modify its project description to incorporate a north-south road.