Developer Sabina Gold & Silver has provided an update on the progress of a feasibility study (UFS) and resource for the proposed […]
By Canadian Mining Journal Staff December 2, 2020 At 12:09 pm 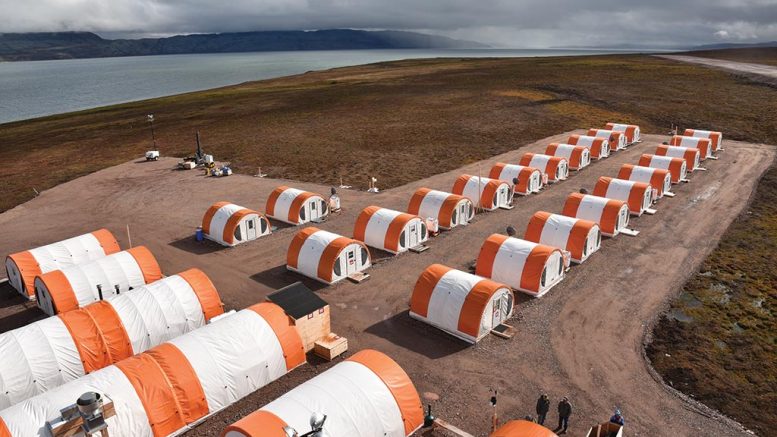 Camp at Back River Credit: Sabina Gold and Silver[/caption]

Developer Sabina Gold & Silver has provided an update on the progress of a feasibility study (UFS) and resource for the proposed Goose mine within its wholly owned Back River gold project in Nunavut. The updated feasibility and resource estimate are expected in the first quarter of next year – both documents will include additions and modifications based on exploration success, trade-off study results and metallurgical test work programs, among others.

“Work continues to advance the updated Back River resource estimate and Goose project UFS for delivery in Q1, 2021,” Bruce McLeod, Sabina’s president and CEO, said in a release. “The significant exploration success we have delivered since the September 2015 feasibility study has been incorporated into the resource estimate and mine plan, along with many other improvements to the project. This work continues to showcase the Goose mine as a very compelling project: the first of many opportunities on Sabina’s 80-km long Back River belt.

McLeod added that the company expects to start collaring an underground exploration decline in the spring.

On the resource side, since the last estimate in 2014, Sabina has completed over 50,000 metres of drilling. This led to the discovery of several new zones and extended the known areas of mineralization. The upcoming resource will include updates to the Goose Main, Umwelt and Echo deposits, as well as new inferred resources at the Nuvuyak and Llama Extension deposits.

The engineering work is centred around an unchanged (from 2015) 3,000 t/d open pit and underground traditional three-stage crushing carbon-in-pulp operation and will now suggest an expansion to 4,000 t/d in the fourth year.

The proposed latest mining sequence is different from the 2015 study. Exploration has defined two high-grade underground zones below the Umwelt pit. The company is looking to schedule this feed earlier on in the mine life – the prior mine plan included underground mining after open pit operations.

With the underground operations planned earlier in the mine life, as well as overall price escalation and inflation, capital and operating costs are expected to be increased over the 2015 estimates. However, with an increased gold price and a higher ounce output, overall project economics are expected to improve relative to the prior study.

Sabina is completing the feasibility study concurrently with detailed engineering work, to ensure accuracy of the overall study. The planned engineering, procurement and construction management (EPCM) contract would be managed by the company.

The developer has all of the major authorizations for construction and operations in hand.

The 2015 feasibility outlined a 3,000 t/d, 12-year mine, producing approximately 200,000 oz. of gold annually from three pits and one underground mine at Goose.