Star Diamond (TSX: DIAM) has provided an update on the progress of a 10 cutter-hole bulk sample program completed by joint venture […]
By Canadian Mining Journal Staff February 22, 2021 At 1:21 pm 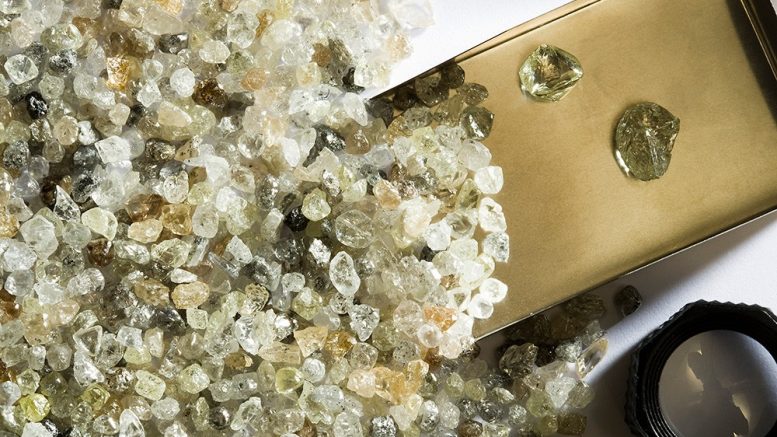 Star Diamond (TSX: DIAM) has provided an update on the progress of a 10 cutter-hole bulk sample program completed by joint venture partner Rio Tinto Exploration Canada on the Star kimberlite at the Star-Orion South diamond project in Saskatchewan. The two partners are in a court battle over the ownership of Star-Orion.

With Rio Tinto advising Star Diamond that the bulk sample program has been completed (which includes processing, diamond recovery and results reporting), the junior notes that it has advised its JV partner in writing that a “comprehensive diamond breakage study” as well as certain other work items remain outstanding. Until these are completed, Star Diamond will not consider the ten cutter bulk sample program complete.

Based on a court undertaking, Rio Tinto previously agreed that it would not call or hold a management committee meeting under the JV agreement between the two partners for a 120-day period following the completion of the 10 bulk sample trenches – the release notes that this would include processing, diamond recovery, and results reporting.

On Feb. 8, Rio Tinto advised Star Diamond that the 120-day period has started, with plans to call a management committee meeting once the 120 days have passed. The release notes that Star Diamond has let Rio Tinto know that “until all processing, diamond recovery and reporting of all diamond results from the ten cutter hole bulk sample program is completed , including the comprehensive diamond breakage study, the 120-day period under the undertaking cannot begin to run.”

In Rio Tinto’s view, the comprehensive diamond breakage study is not required by the undertaking.

Star Diamond intends to “vigorously resist any attempt by Rio Tinto Canada to call a management committee meeting other than in compliance with the undertaking,” and, if necessary, plans to apply to the court to enforce the undertaking.

“Contrary to its prior assurances to Star Diamond, Rio Tinto Canada has not yet completed a comprehensive diamond breakage study. This study is required to properly assess the full nature, extent and potential causes of the undue diamond breakage that appears to have resulted from Rio Tinto Canada's use of unproven and inadequately tested extraction and/or diamond recovery methodologies, and the extent to which larger diamonds would have been recovered in the absence of such breakage,” Ken MacNeill, Star Diamond president and CEO, said in a release.

The 2019 bulk sample program did meet Rio Tinto’s objective of improving confidence in the grade of the Star Kimberlite, according to Rio Tinto.

Star Diamond has also announced that, based on timing updates from the court, a trial over the project ownership is not expected to take place this year.

Rio Tinto’s Canadian subsidiary may earn up to a 60% interest in the company’s Fort à la Corne properties (including Star-Orion South) through spending a total of $70.5 million on exploration and development at Star-Orion South in four phases – this includes the completion of a feasibility study. In November 2019, Rio Tinto advised Star Diamond that it would be looking to exercise its full option to earn a 60% share in the Fort à la Corne holdings. Star Diamond claims that by exercising all options at once and ahead of schedule, Rio Tinto breached the deal conditions.

Once the major earns the 60% stake in the project, the junior, with a $97.2-million market cap, would need to either pay its share of the costs, or see its interest in Star-Orion diluted. As of the end of September 2020, Star Diamond had $5.2 million in cash and equivalents.