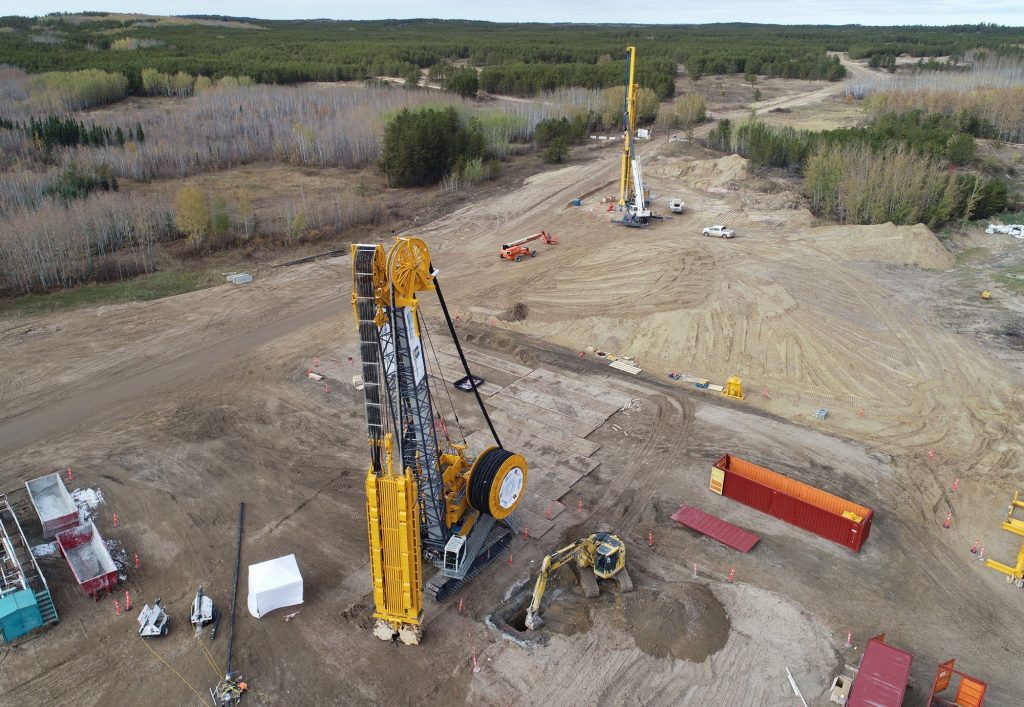 Rio Tinto used a Bauer trench cutter to extract a bulk sample at the Star-Orion diamond project in Saskatchewan. Credit: Rio Tinto[/caption] SASKATOON – Star Diamond has begun to receive results from Rio Tinto's bulk-sampling program at the Star-Orion South project in central Saskatchewan. Rio has so far processed material from four of the 10 trenches excavated last year from the Star kimberlite at the project, but full results have only been reported from the first – 19 FALCT001. A total of 2,517 commercial sized diamonds weighing 120.1 carats were recovered from 1,206.4 tonnes of material collected from first trench. (Commercial sized diamonds are defined as those that will not pass through a +1 DTC screen, which has round apertures of 1.09 mm.) The sample included four phases of kimberlite that returned sample grades of between 1.07 carat per hundred tonnes (cpht) and 14.09 cpht. Only two of the kimberlite types were deemed to contribute to the project's economics and were included in a resource estimate completed by Star as part of a 2018 preliminary economic assessment PEA – MJF (Mid Joli Fou) and EJF (Early Joli Fou). EJF, which Star notes is the dominant kimberlite unit in terms of volume and grade, returned 2,031 diamonds weighing 109.67 carats from 778.24 tonnes for a grade of 14.09 cpht. The three largest diamonds, weighing 3.27, 3.03 and 1.73 carats, were all recovered from this section of the kimberlite. From MJF, 168 diamonds weighing 3.58 carats were recovered from 109.82 tonnes extracted for a grade of 3.26 cpht. "The diamond results from 19FALCT001 provide an early assessment that the trench cutter bulk sampling method has the potential to replicate grades similar to the previous underground bulk sampling and (large diameter diamond drilling) performed by Star Diamond on the Star kimberlite,” said George Read, Star Diamond's senior vice-president of exploration and development, in a release. “Individual EJF kimberlite samples in this first trench exhibit a range of grades (4.88 to 23.34 cpht), which are as expected for the EJF kimberlite." Rio Tinto began processing the samples in April at a processing plant it built onsite. Concentrates are shipped offsite to SRC's lab in Saskatoon for final diamond recovery. The major used a novel method to collect the sample, using a Bauer trench cutter normally used in civil engineering applications. However, while the sample program was designed to minimize diamond breakage, Star says SRC has reported diamonds are being broken – either in the collection or processing of the samples. One issue may be the larger than expected size of samples sent to SRC for processing, but Star says a comprehensive diamond breakage study will be needed to pinpoint the cause. Star also reports that some coarse (6 to 25-mm) kimberlite material from the first bulk sample trench has yet to be processed. The ownership of the Star-Orion project is contested. Rio Tinto signed an agreement with Star in 2017 to earn up to a 60% interest in the Star-Orion project over 7.5 years with spending of up to $75 million. Rio says it has completed the work required under the four-stage agreement, and opted to exercise its rights for a majority stake in the project last November. But Star Diamond says the company has not satisfied its obligations under the agreement and started legal proceedings against its partner in March. The large, low-grade Star-Orion project contains high-value large diamonds and rare Type IIa stones. A 2018 prefeasibility study projected an open-pit operation with a mine life of 34 years would cost $1.4 billion to build and produce 66 million carats. For more information, visit: stardiamondcorp.com.