The following is from a new release distributed by PwC Canada. VANCOUVER – The B.C. mining industry is cautiously optimistic as prices […]
By Marilyn Scales May 16, 2017 At 4:34 pm 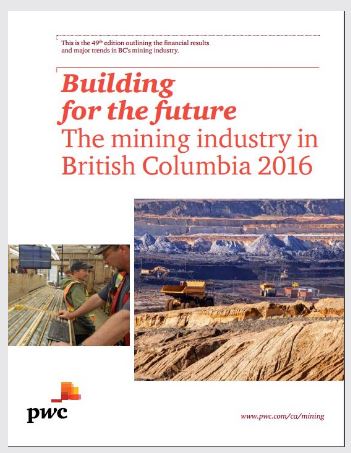 The BC mining industry is cautiously optimistic according to the latest report for PwC.

The following is from a new release distributed by PwC Canada. VANCOUVER – The B.C. mining industry is cautiously optimistic as prices of key metal and resource commodities either rose or stabilized in 2016. The same trend continued in Q1 2017. Net mining revenues came in at $7.3 billion in 2016 up from $6.3 billion in 2015, driven by an increase in gross mining revenue and a decrease in costs for smelting, refining charges, and freight costs. [caption id="attachment_1003718458" align="alignleft" width="232"] The BC mining industry is cautiously optimistic according to the latest report for PwC.[/caption] "The last year was another challenging year for the BC mining industry due to the continued volatility in global metal and mineral prices. However, since the end of 2016, we've seen an upward trend in prices of the commodities that are key to BC's mining results," said Mark Platt, BC mining leader and partner, PwC Canada. "BC mining companies continued to work hard to keep their costs under control." According to the report, gross mining revenue increased to $8.7 billion in 2016 from $7.7 billion in 2015. Cash flow from operations and capital expenditures also showed encouraging improvement year on year. The price of global commodities, in particular coal and copper, started to pick up again towards the end of year and held their ground into the first part of 2017, which augurs well for the BC mining industry in 2017 Jobs are also slowly returning to the sector as mines advance, open or restart across the province. The report indicates the number of jobs directly related to the survey participants increased to 9,329 in 2016, up from 9,221 in 2015. Northern BC was one of the bright spots with the reopening of two metallurgical coal mines and a third set to open this summer. These and other current business issues are discussed in the BC Mining report, Building for the future: The mining industry in British Columbia 2016. Click the title to access the report.