ONTARIO – Canada’s history just got a little more interesting with the recovery of an Avro Arrow model from Lake Ontario off […]
By Marilyn Scales August 22, 2018 At 4:29 pm 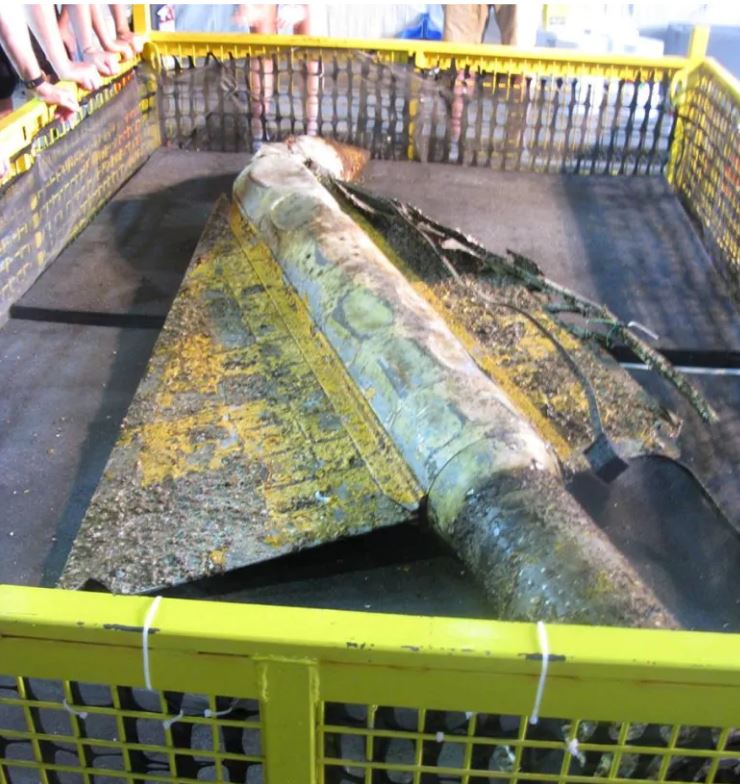 This is the Avro Aero one-eighth model recovered recently from Lake Ontario. (Image: OEX Recovery Group)[/caption] ONTARIO – Canada’s history just got a little more interesting with the recovery of an Avro Arrow model from Lake Ontario off Prince Edward. The vehicle is about 3.0 metres long, a one-eighths scale of the actual plane. The Canadian Aviation and Space Museum took delivery of the model earlier this week. The Avro Arrow was Canada’s first foray into building supersonic  jet airplanes and could have put this country at the forefront of military aviation. The project was inexplicably scrapped in 1959, and the six operating prototypes were destroyed. As well the production tooling and development related materials were also scrapped. The model recovered was an early one that sported delta wings, a relatively new concept the time. The goal is yet to recover any of the later versions tested before a fully functioning jet was built. Four other models have been located in Lake Ontario and efforts will be made to recover them as well. As part of a Canada 150 project, the recovery effort was spearheaded by OEX Recovery Group and sponsored Osisko group companies, Osisko Mining and Osisko Gold Royalties, in collaboration with partners at National Bank, the Bank of Montreal, Canaccord Genuity, Maxit Capital, Eight Capital and Northfield Capital; the Canada Aviation and Space Museum (CASM), Royal Canadian Air Force (RCAF), the Canadian Conservation Institute, and Bennett Jones LLP. Support for this project was provided by Scarlett Janusas Archaeology, Canadian Coast Guard, the Royal Canadian Military Institute and Canada Company.