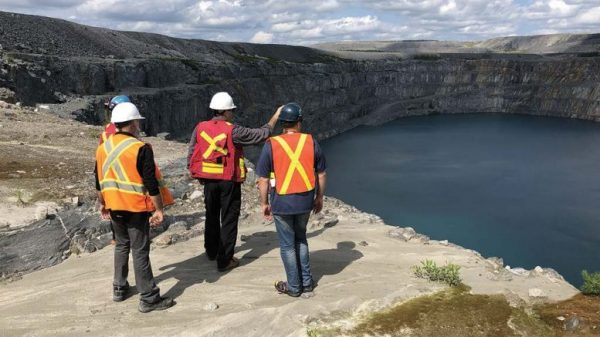 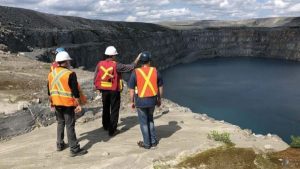 Historic pit at Troilus Credit: Troilus[/caption] A preliminary economic assessment (PEA) for Troilus Gold’s namesake project in Quebec has outlined a 22-year, 35,000 t/d open pit and underground mine, with the 9,000 t/d sub-surface portion starting up in the eighth year. The resulting operation would produce an average of 220,000 gold oz. a year over the first five years of operation, and 246,000 gold oz. in the first 14 years of mine life. From year 15 on, the mine would generate 98,000 gold oz. annually. With all-in sustaining costs estimated at US$1,051 per gold oz. and an initial capital outlay of US$333 million, the after-tax net present value estimate for the project comes in at US$576 million, at a 5% discount rate, with a 22.9% internal rate of return, based on US$1,475 per oz. gold. The underground development would require an additional US$240 million of capital to establish between years six and eight. Open-pit mining would be completed by year 14 – the early-stage study scheduled pit feed from the 87, J and Southwest zones; the 87 zone is the sole area with an underground component. During mining, a stockpile would be maintained to provide supplemental mill feed in the later years. On the processing side, the plant design features crushing, milling with gravity gold concentration and copper flotation and concentrate filtration. The gold-enriched copper concentrate would be sent to a smelter for refining. Gold recoveries are estimated at 90%, with 30% of the gold produced onsite in the gravity concentrate. The development would churn out a payable total of 3.8 million gold oz., 265 million lb. of copper and 1.5 million oz. of silver over its life. The past-producing site includes infrastructure, such as a power line, road access and an existing tailings facility and water treatment plant. In a release, Justin Reid, the company’s CEO, noted that Troilus is now looking to start a prefeasibility study on the asset, with additional permitting and exploration also underway. “With a strong treasury to support next steps, we will now be commencing prefeasibility work and working towards finalization of the environmental impact study for the project while continuing to explore the geological potential of the (1,070-sq.-km) Troilus property.” Reid also highlighted the exploration upside of the project. “The Troilus geological team has demonstrated the ability to identify an abundance of untested targets and has a track record of adding significant ounces over a very short period of time. We believe the Troilus property has the potential to extend mine life beyond the projected 22 years presented in the PEA and provide(s) the opportunity to expand the scale in the future by continuing to seek increases to the mineral resource estimate with ongoing exploration and drilling.” At the end of July, the company published an updated resource estimate for the property, with 177.3 million indicated tonnes grading 0.75 g/t gold, 0.08% copper and 1.17 g/t silver, as well as 116.7 million inferred tonnes at 0.73 g/t gold, 0.07% copper and 1.04 g/t silver. The Troilus property includes a past-producing gold and copper mine, which generated over 2 million gold oz. and 70,000 tonnes of copper from open-pit operations between 1996 and 2010. The site lies within the Frotet-Evans greenstone belt and is 170 km by road northeast of Chibougamau. For more information, visit www.TroilusGold.com.