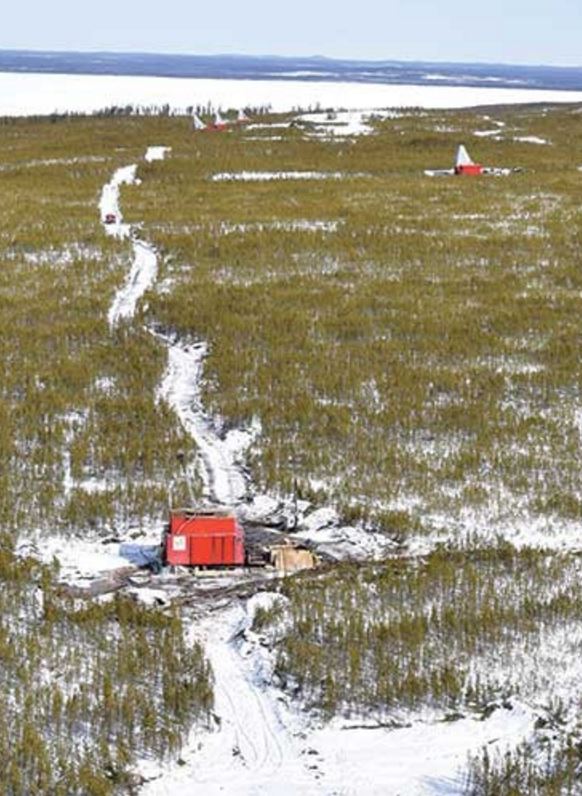 Drilling has already outlined more than 300 million lb of uranium oxide at the Rook I property. (Credit: The Northern Miner) Drilling has already outlined more than 300 million lb. of uranium oxide at the Rook I property. (Credit: The Northern Miner)[/caption] Expansion drilling at the A3 shear intersected a new area of semi-massive to massive pitchblende outside both the A3 high grade domain and the current resource area. Hole AR-17-136c2 returned 9.58% uranium oxide over 13.5 metres including 3.49% over 5.0 metres. Drill testing of the Southwest gap cut several lenses of high grade material that represents an opportunity to expand the resource.  Hole AR-17-131c3 assayed 2.51% U3O8 over21.5 metres including 4.68% over 7.0 metres. Hole AR-17-131c4 returned 1.67% U3O8 over 22.5 metres. And finally, hole AR-17-143c1 returned 1.09% U3O8 over 15.5 metres. Highly anomalous uranium values were intersected in the first two holes to test a parallel structure 300 metres southeast of the Arrow deposit. NexGen says this is the first time uranium has been encountered on that particular conductor. NexGen is planning at least 25,000 metres of drilling with seven rigs for the summer program at Arrow. The next step will be a preliminary economic assessment. The company has cash on hand of $200 million with which to fund its programs. A detailed drill table is available in the July 25, 2017, news release posted at www.NexGenEnergy.ca.