SASKATCHEWAN – Vancouver’s NexGen Energy is having tremendous success at its Rook I project on the southwest rim of the Athabasca Basin […]
By Marilyn Scales July 27, 2016 At 4:23 pm 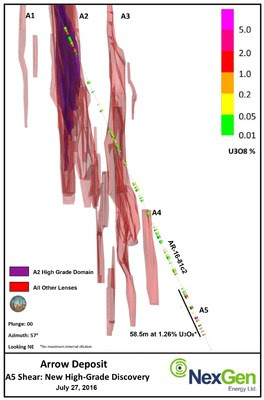 Three-dimensional view of the A5 shear location.

SASKATCHEWAN – Vancouver’s NexGen Energy is having tremendous success at its Rook I project on the southwest rim of the Athabasca Basin – success that rivals its neighbour Fission Uranium at Patterson Lake South. [caption id="attachment_1003714948" align="alignleft" width="198"] Drill hole locations at the Arrow deposit.[/caption] The company says the Arrow deposit appears to be composed of five high grade shear zones (A1 through A5) that are sub-parallel to each other and have a combined thickness of 280 metres. The new mineralized zone is open in all directions. NexGen’s summer 2016 drill program at the Arrow deposit will comprise 35,000 metres. The deposit is now known to cover an area of 879 by 280 metres with a vertical extend between 100 and 920 metres below surface. The maiden inferred mineral resource contains more than 201 million lb of U3O8 in 3.48 million tonnes grading 2.63%, and the deposit remains open in all directions.