SASKATCHEWAN – Denison Mines of Toronto says the test results of in situ recovery of uranium from the Wheeler River project are […]
By Marilyn Scales August 27, 2019 At 4:20 pm 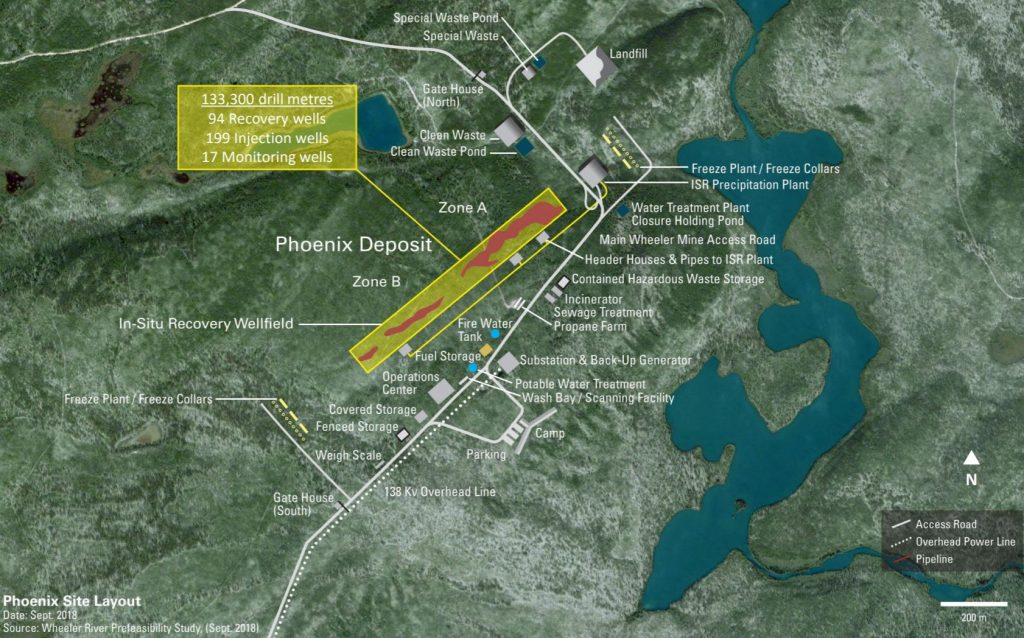 Proposed site plan for the Wheeler River uranium project in Saskatchewan. (Image: Denison Mines)[/caption] SASKATCHEWAN – Denison Mines of Toronto says the test results of in situ recovery of uranium from the Wheeler River project are positive. Denison is the 90% owner and operator of the project located in the eastern part of the Athabasca Basin, and JCU (Canada) Exploration Co. holds the remaining 10%. The tests used water to evaluate the hydraulic conditions and to assess how the mining solution will flow between pairs of test wells. The work was done to increase confidence is the ISR method, as recommended in the 2018 pre-feasibility study. Denison said the initial test results confirm hydraulic connectivity between multiple test wells in test area No. 1 of the Phoenix deposit. Additional results from area No. 1 are expected as are results from test area No. 2. Two large diameter commercial scale wells are planned for these test areas later this summer. A hydrogeological model will be made based on the quantitative analysis and integration of data from the planned tests. The model will be used to simulate groundwater flow and to evaluate system sensitivity to key parameters as part of the feasibility study. The Wheeler River project  has probable resources of 109.4 million lb. of uranium dioxide. Visit www.DenisonMines.com for details regarding the pre-feasibility study.