BRITISH COLUMBIA – StrikePoint Gold of Vancouver reports the discovery of a new polymetallic vein at its Glacier Creek property near Stewart. […]
By Marilyn Scales November 27, 2018 At 4:32 pm 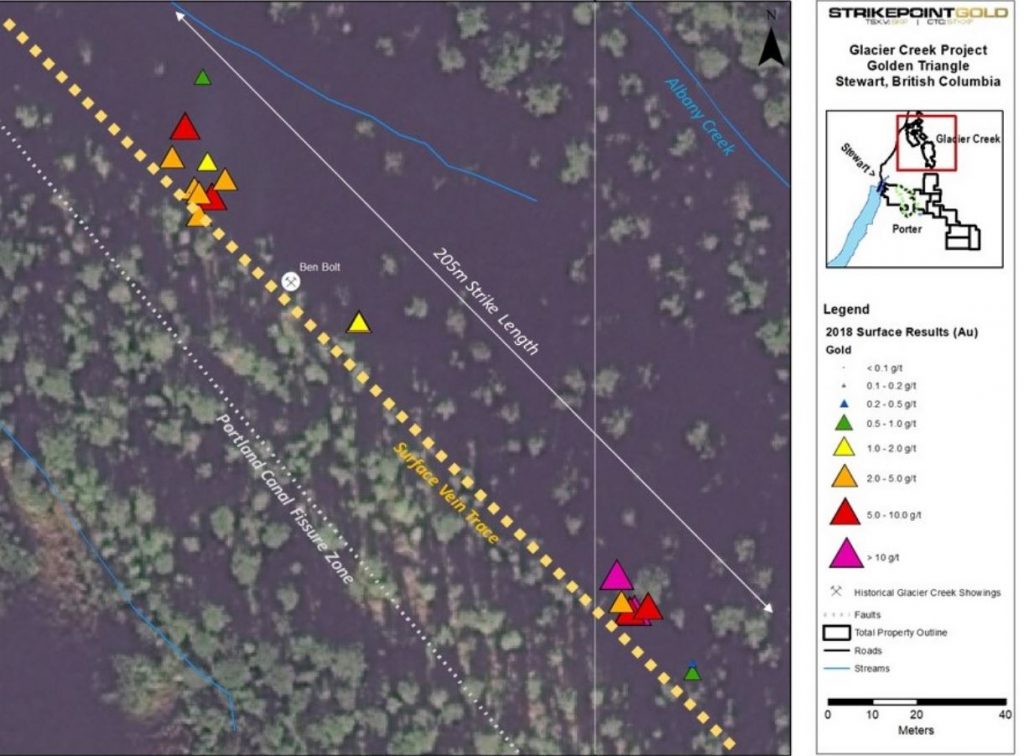 The recently discovered polymetallic vein at Glacier Creek. (Image: StrikePoint Gold)[/caption] BRITISH COLUMBIA – StrikePoint Gold of Vancouver reports the discovery of a new polymetallic vein at its Glacier Creek property near Stewart. The vein was found within the land package of the Porter project that StrikePoint acquired from Skeena Resources in July 2018. The vein  has a strike length of 205 metres and is up to 2 metres thick at the surface. It consists of brecciated mudstones with quartz and massive sulphides including pyrite, galena and sphalerite. The vein has a dip of 30° and is open along strike. StrikePoint took 18 surface samples, some of which contained only precious metals and others that added zinc to the mineralization. The best sample graded 876 g/t silver, 20.8 g/t gold, and 12.5% zinc. The discovery lies in the same area as the historical Ben Bolt mine that was worked from 1910 to 1912. The old mine lies along the Portland Canal Fissure zone. The zone also supported the Silverado, Porter and Big Nunatak mines. Since 1912, no exploration has taken place at the Ben Bolt property, a situation StrikePoint intends to remedy with its 2019 drill program. The StrikePoint corporate presentation contains information about the historical mines in British Columbia’s Golden Triangle. Visit www.StrikePointGold.com.