With its Cigar Lake uranium mine in northern Saskatchewan on care and maintenance for the majority of the second and third quarters, […]
By Alisha Hiyate November 4, 2020 At 12:25 pm 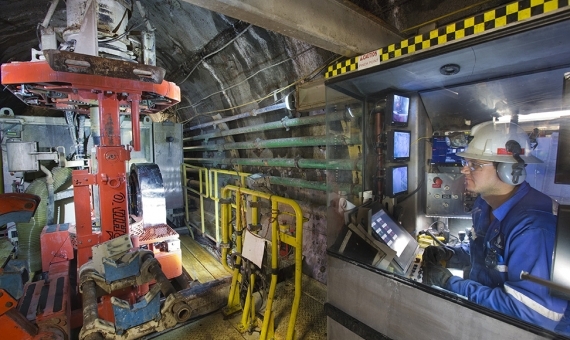 At the Cigar Lake uranium mine in Saskatchewan. Credit: Cameco

At the Cigar Lake uranium mine in Saskatchewan. Credit: Cameco[/caption] With its Cigar Lake uranium mine in northern Saskatchewan on care and maintenance for the majority of the second and third quarters, Cameco reported a quarterly net loss of $61 million ($78 million adjusted) for the third quarter, following a net loss of $53 million in the previous quarter. Cigar Lake restarted in September, after a six-month suspension in response to the COVID-19 pandemic. In a release, Cameco's president and CEO, Tim Gitzel, noted that the safety of employees and communities have been top of mind in the company's actions this year. “As expected, our results continue to be impacted by the proactive operational decisions taken earlier this year,” Gitzel said. “We believe that the actions we have taken to slow the spread of the COVID-19 virus are prudent and reflect our values – placing priority on the health and safety of our employees, their families and their communities. However, our decisions do come with near-term costs.” For the quarter, Cameco reported revenue of $379 million, compared to $303 million in the same quarter of last year. The company sold 6.7 million lb. uranium oxide at an average realized price of US$33.77 per lb. Cameco's share of production from Cigar Lake in the recent quarter was 200,000 lb. (Cameco is the operator and holds 50% of the mine with partners Areva, Idemitsu Uranium, and TEPCO Resources.) The uranium miner expects its share of production for the year to be around 5.3 million lb. uranium oxide. Adding uncertainty for the company is a tax dispute with the Canada Revenue Agency. On Oct. 30, Cameco reported CRA is appealing a June Federal Court of Appeal decision that ruled in the miner's favour regarding its dispute of reassessments issued for 2003, 2005 and 2006. If the Supreme Court decides to hear the CRA's appeal, it could be heard in the second half of 2022. While 2020 has been a tough for the company, Gitzel expressed optimism for the future. “In an environment where we think trade policy, like the amendment to the Russian Suspension Agreement in the U.S., will create opportunities for commercial suppliers like Cameco and where utilities have growing uncovered requirements, we are excited about the fundamentals for our industry,” he said. “We see demand for nuclear growing driven by an increasing focus on electrification and the recognition that to achieve this while still meeting clean-air and climate change goals, nuclear will be needed in the toolbox. And this is occurring precisely while there is growing uncertainty and risk around global uranium supply.” Gitzel added the company believes rising concern around security of supply will allow it to “layer in the long-term contracts necessary" to support the restart of its McArthur River/Key Lake operations in Saskatchewan. Cameco's McArthur River/Key Lake and Rabbit Lake mining operations in Saskatchewan were suspended prior to the pandemic and remain on care and maintenance. It also holds a 40% interest in the Inkai in-situ recovery mine in Kazakhstan with 60% held by Kazatomprom. The operation was on reduced production between April and August; given uncertainty in Kazakhstan caused by the pandemic, Cameco says it will not be providing an outlook of its expected purchases of Inkai production (it is entitled to buy 59.4% of production at a discount to the spot price) this year. The company recently strengthened its balance sheet, and at the end of September, had $793 million in cash and short-term investments and $1 billion in long-term debt. Another $1-billion credit facility remains undrawn. For 2020, Cameco announced it will issue an annual dividend of 8¢ per share. For more information, visit www.cameco.com.