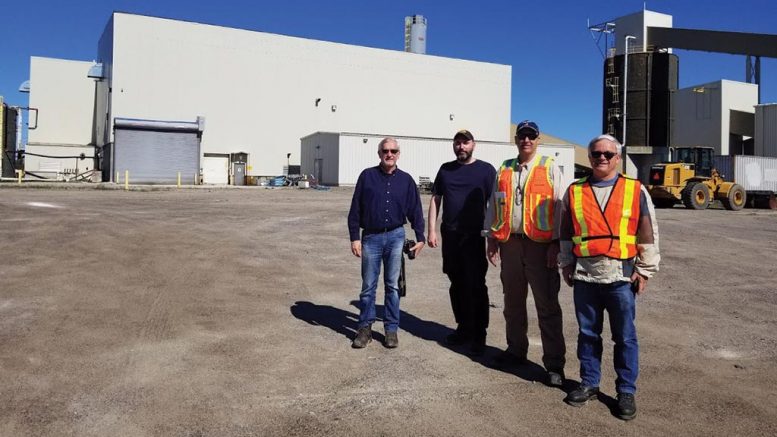 Rockcliff Metals team outside of the Bucko mill Credit: Rockcliff Rockcliff Metals team outside of the Bucko mill Credit: Rockcliff[/caption] MANITOBA – Rockcliff Metals has released resource updates for the Tower and Talbot volcanogenic massive sulphide (VMS) deposits within the Flin Flon-Snow Lake greenstone belt. At its wholly-owned Tower property, indicated resources are now at 1 million tonnes grading 5.74% copper-equivalent for a total of 129.8 million lb. of copper-equivalent with additional inferred resources of 367,000 tonnes at 4.29% copper-equivalent totaling 34.7 million lb. copper-equivalent. When compared with the prior resource estimate, the indicated resource grade at Tower increased by 28%. “This resource update is truly a transformative one as the exceptional high-grade mineralization of the deposit is becoming clearer,” Alistair Ross, the company’s president and CEO, commented on the Tower resource update. “The location of the Tower deposit on a major year-round highway, adjacent to major power lines and (with) easy access to our leased Bucko mill reduces infrastructure risk for any future mine development scenario.” At the 51%-held Talbot project (49% Hudbay), indicated resources stand at 2.2 million tonnes at 4.4% copper equivalent for a total of 212.7 million lb. of contained metal and inferred resources are now at 2.4 million tonnes at 2.98% for a total of 160.4 million lb. of copper-equivalent. The update for this property largely appears to be an upgrade of the prior inferred resource. At the Tower property, Rockcliff has started drilling the 750 metres of strike from the Tower deposit to the Tower South anomaly. The Tower and Talbot deposits are open for expansion. The company has also released the results of metallurgical studies on material from the Tower, Talbot and Rail deposits, which suggest copper concentrate grades of 28.2% to 31.3% with copper recoveries of 91.2% to 94.4% and potential to produce zinc concentrates grading over 50% zinc without the use of cyanide. According to the company, these concentrates would be market-quality. Rockcliff has a six-year lease on the 1,000 t/d Bucko mill and tailings facility, which is within trucking distance of the three deposits. Follow-up work will focus on optimizing the concentration process at Bucko to evaluate potential mill upgrades and the associated capital required. For more information, visit www.RockcliffMetals.com.