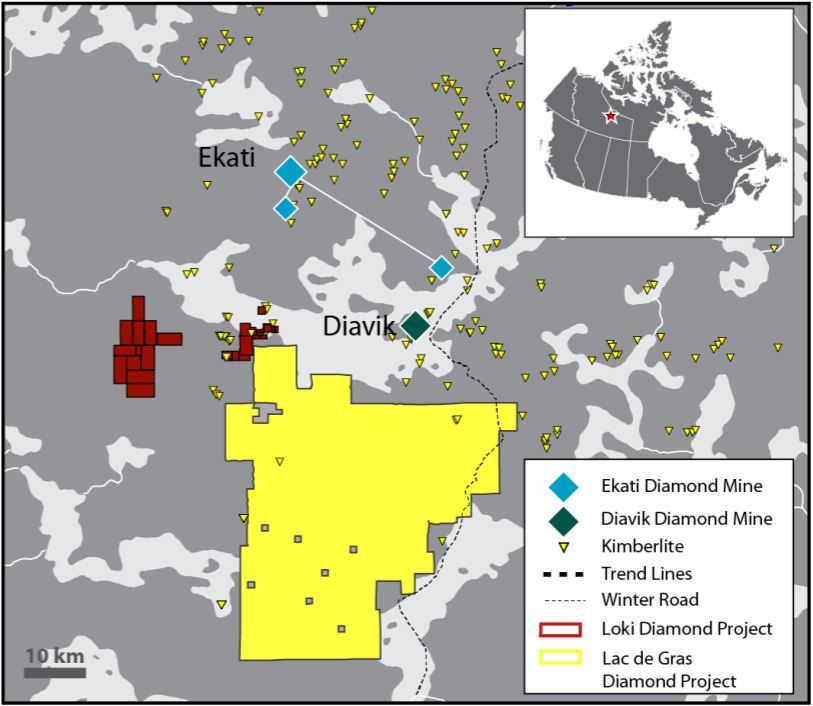 Location of the LDG property near the Ekati and Diavik diamond mines. (Image: North Arrow Minerals)

Location of the LDG property near the Ekati and Diavik diamond mines. (Image: North Arrow Minerals)[/caption] NORTHWEST TERRITORIES – Vancouver-based North Arrow Minerals says its JV partner and operator at the LDG project, Dominion Diamond Mines, has intersected kimberlite in the first drill hole of the season. The project is located near Lac de Gras, 10 km southwest of the Diavik diamond mine and 20 km south of the Ekati mine. The drill hole was oriented to test a resistivity anomaly coincident with gravity and magnetic lows. It intersected the kimberlite about 40 metres down hole and remained in favourable mineralization at 67 metres, when North Arrow published a news release. This summer’s program includes drilling, LIDAR surveying, prospecting as well as till mapping and sampling. Work this year has a budget of $2.8 million. The work at LDG is being fully funded by Dominion after which Dominion will have earned 89% of the project. More information about the LDG project and North Arrow’s several other diamond properties is posted at www.NorthArrowMinerals.com.