The leadership of the Taku River Tlingit First Nation (TRTFN) has been suggesting since 2018 that the Tulsequah Chief copper-gold mine near […]
By Canadian Mining Journal Staff August 30, 2022 At 3:47 pm 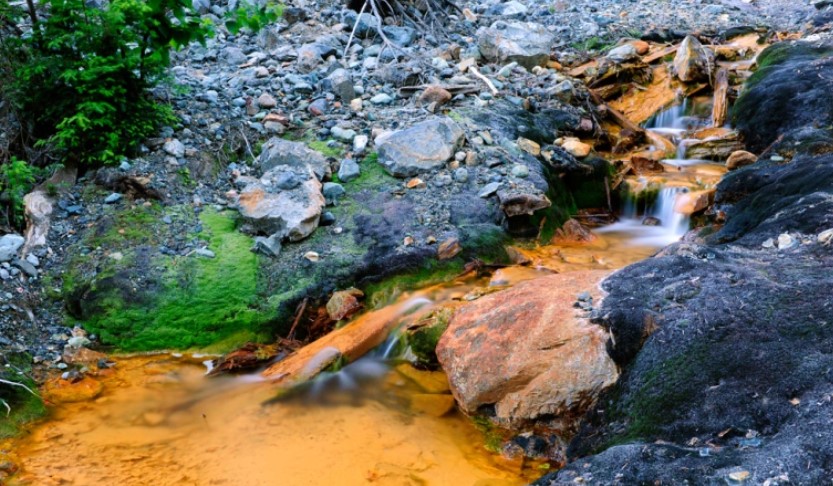 Acid mine drainage makes it way from the old Tulsequah Chief mine to the Tulsequah and Taku rivers. Credit: Chris Miller (www.CSMphotos.wordpress.com).

The leadership of the Taku River Tlingit First Nation (TRTFN) has been suggesting since 2018 that the Tulsequah Chief copper-gold mine near Atlin, B.C., needs remediation to prevent further degradation of the Tulsequah River. Work at the mine has been suspended since owner Chieftain Metals filed for receivership in 2016.

The First Nation does not believe that mining can resume sustainably at the site. It seeks full remediation for the site, including outstanding water quality issues in the river valley. The Indigenous community wants to be fully involved and work with the province, federal government, and other partners to “restore balance and  harmony” to its land.

Despite ongoing discussions with the B.C. government, the TRTFN says little progress has been made. Part of the problem has been that the owner still holds the permits to the site.

The TRTFN notes that West Face Capital, the primary secured creditor of Chieftain, missed the Aug. 11, 2022 deadline to file materials seeking to reappoint a receiver. That is a small victory for them, but the Ontario Superior Court stayed the dissolution of Chieftain until after October 2022. Chieftain retains its assets and permits until that time.

According to the First Nation, the Tulsequah Chief site has had some work done. The B.C. government provided $1.6 million, and Teck Resources has contributed almost $3.3 million. The TRTFN says much more is needed to repair bridges, rebuild the mine road so that equipment can reach the site to do the remediation, erosion protection for the airstrip, and a water quality monitoring program. One estimate put the cost of such undertakings at nearly $50 million.

Detailed information about the mine site is available on the B.C. environmental website.