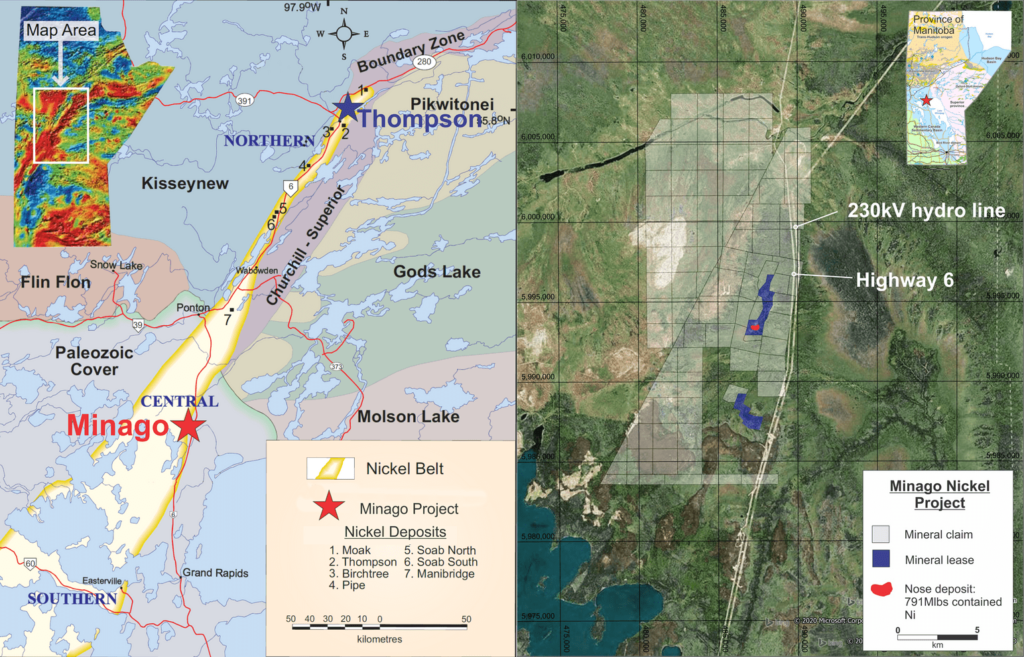 Minago is located in the southern extent of the Thompson nickel belt. Credit: Flying Nickel Mining

Flying Nickel Mining's (TSXV: FLYN; OTC: FLYNF) flagship Minago project in Manitoba is expected to have an industry-leading low carbon footprint, lower than 99% of existing global nickel production, according to a study by Skarn Associates, a metals and mining ESG research company.

When in operation, the Minago project is expected to produce 0.99 tonne of carbon dioxide (CO2) per tonne of nickel-equivalent production over the life of mine, about 97% lower than the industry average of 33.4 tonnes of CO2 in 2021, the study found.

This carbon dioxide footprint estimate does not include the carbon offset expected to be provided from the process of spontaneous mineral carbonation from the tailings and waste rock comprised largely of serpentine rock, which naturally absorbs CO2 when exposed to air.

"Flying Nickel aims to be one of the world's most environmentally friendly nickel mining company, with this study demonstrating Minago being top 1% in lowest carbon footprint that utilizes Manitoba's hydroelectricity, trolley trucks and electric mine fleet. The clean nickel from Minago is ideally suited to go into high-performance nickel batteries powering modern electric vehicles," John Lee, Flying Nickel's CEO, said.

Since 1966, the Minago nickel sulphide project has received over $70 million in investments. The property is located in the southern part of Manitoba's Thompson nickel belt, the second-largest nickel camp in Canada with over 5.0 billion lb. of past nickel production.

Minago has generally similar structural, geological and mineralogical characteristics as deposits located on the Thompson Dome to the north. Exploration to date has outlined 721.6 million lb. of measured and indicated nickel (44.2 million tonnes at 0.74% nickel) and 318.9 million lb. inferred nickel (19.6 million tonnes at 0.74% nickel) in open pit and underground resources. The nickel mineralization at Minago remains open at depth beyond 350 metres and along strike.

The project is currently in the permitting stage. Issuance of an updated environmental licence is expected this year along with completion of feasibility study.