ONTARIO – Argonaut Gold continues to intersect high-grade mineralization below and adjacent to the reserve pit limits at its 22-sq.-km Magino project, […]
By Magda Gardner March 3, 2020 At 1:19 pm 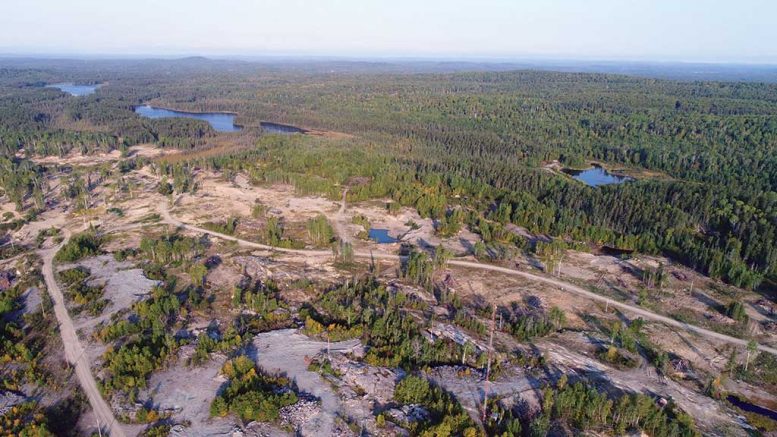 Aerial view of the Magino project Credit: Argonaut[/caption] ONTARIO – Argonaut Gold continues to intersect high-grade mineralization below and adjacent to the reserve pit limits at its 22-sq.-km Magino project, 40 km northeast of Wawa. The most recent drill highlights include 11 metres of 11.68 g/t gold, 6 metres of 10.79 g/t gold and 2 metres of 17.26 g/t gold. As reported in December, the ongoing drilling continues to intercept two high-grade structural zones, the Elbow and South areas. “We are very pleased with the ongoing success of our exploration program at Magino, where we continue to intersect higher-grade gold mineralization in structures at depth and as we step out to the west of Magino,” Pete Dougherty, Argonaut’s president and CEO, said in a release. These prospective west-trending structures appear to extend onto Argonaut’s holdings from Alamos Gold’s adjacent Island Gold mine. Both the Elbow and South zones are open along strike and at depth. Argonaut has now expanded the drill program to test targets between the two zones, within the Webb Lake Stock (WLS) and along the contact between the WLS and volcanic rocks. “Our exploration will continue to test the high-grade structures as we drill to the west and the higher-grade shoots at depth,” Brian Arkell, the company’s VP of exploration added. “Drilling is still very wide-spaced but we can see continuity in a number of high-grade structural zones, laterally and at depth.” Assays for two additional holes, which intersected visible gold, are pending. The Elbow zone, found along the WLS-volcanic contact in the northeastern part of the Magino deposit, has been traced over 500 metres of strike to date and down to a depth of 675 metres. The South zone, south of the WLS, is made up of two gold-bearing structures. The company has also completed a down-hole optical survey on 31 historical drill holes to collect additional structural data and enhance its understanding of the gold controls at Magino. These results, as well as data gathered through mapping and oriented core drilling, will be used to target prospective structures and upgrade the existing resource model. Argonaut has also completed geophysical surveys on areas to the west and north of the Magino deposit. “We are especially looking forward to our upcoming district exploration program. Our property to the west and north of Magino has seen very little exploration until last year when our prospecting teams mapped and identified a number of targets. These targets have the right alteration and strong geochemistry where exposed, but for the most part are in flat, covered ground,” Arkell concluded. Argonaut now plans to complete a second-phase exploration program starting in April, which will include 20,000 metres of drilling on the Magino targets with an additional 5,000 metres planned to test newly defined areas. Current reserves at Magino total 59 million tonnes grading 1.13 g/t gold for a total of 2.1 million oz. A 2017 feasibility study for the project outlined a 10,000 t/d open pit operation with a 17-year mine life, producing an average of 150,000 oz. of gold in the first five years of operation. With a pre-production capital cost of US$293 million, the project net present value estimate, at a 5% discount rate, came in at US$288 million. The Magino property includes a past-producing underground mine. For more information, visit www.ArgonautGold.com.