BRITISH COLUMBIA – GT Gold has released a maiden resource estimate for the Saddle North gold-rich copper porphyry within its wholly owned […]
By Magda Gardner July 7, 2020 At 11:35 am 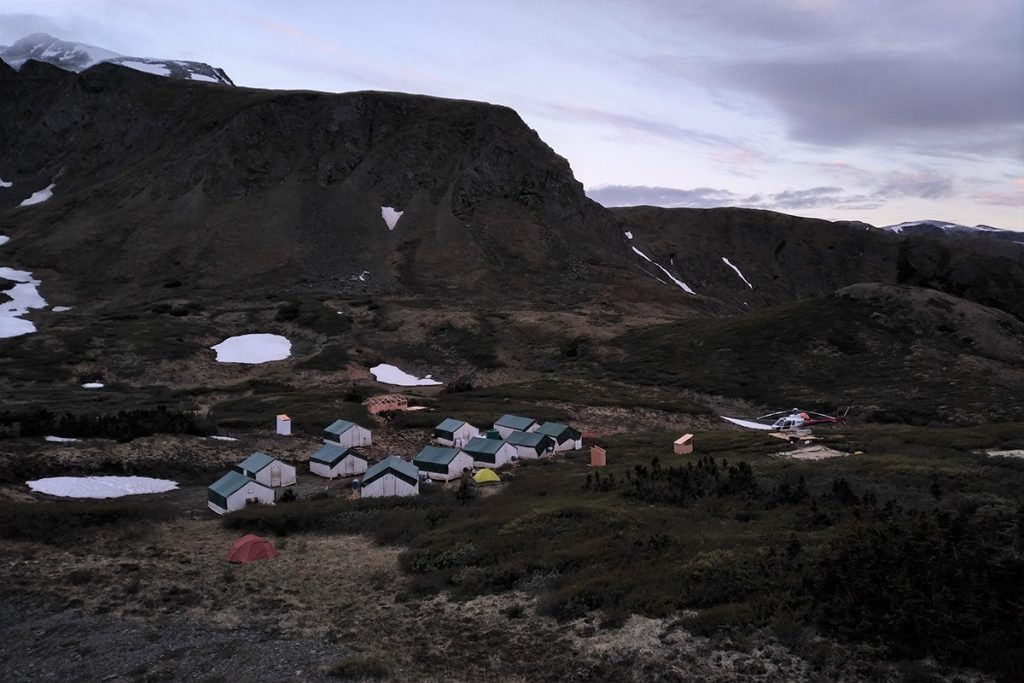 Saddle Camp Credit: GT Gold[/caption] BRITISH COLUMBIA – GT Gold has released a maiden resource estimate for the Saddle North gold-rich copper porphyry within its wholly owned 468-sq.-km Tatogga property in northern B.C. Total indicated resources stand at 298 million tonnes grading 0.28% copper, 0.36 g/t gold and 0.8 g/t silver, containing 1.8 billion lb. of copper, 3.5 million oz. of gold and 7.6 million oz. of silver. Inferred resources total 543 million tonnes at 0.25% copper, 0.31 g/t gold and 0.7 g/t silver, for a further 3 billion lb. of copper, 5.5 million gold oz. and 11.6 million oz. of silver. The deposit includes both open-pittable and underground components; the majority of the current resource is in the open pit classification. “We are proud of the value generated for our shareholders, especially considering this is one of the most recently discovered gold-copper porphyries world-wide, with the first borehole drilled as recently as late 2017,” Paul Harbidge, the company’s president and CEO, said in a release. In the open-pit category, indicated resources include 217.1 indicated tonnes grading 0.25% copper, 0.29 g/t gold and 0.65 g/t silver with a further 253.5 million inferred tonnes at 0.22% copper, 0.24 g/t gold and 0.53 g/t silver. These were estimated using a net smelter return (NSR) cut-off of $9 per tonne. Underground indicated resources are at 80.9 million tonnes at 0.35% copper, 0.56 g/t gold and 1.16 g/t silver and inferred resources include 289.3 million tonnes grading 0.27% copper, 0.38 g/t gold and 0.78 g/t silver. This component is based on a mining shape derived using a $16 per tonne NSR cut-off. At the end of April, the company provided a summary of the geological model for the Saddle North porphyry. The current mineralized system covers a surface area of 1.2 km by 850 metres and extends over a vertical span of 1.6 km; the deposit is open along strike and at depth. Harbidge added that this year’s exploration work will be focused on testing targets in the Quash Pass area at Tatogga, 7 km from the Saddle area, where GT has identified a 5 km to 6 km geochemical and geophysical anomaly – drilling is expected to start in late July. GT Gold is also working on a preliminary economic assessment for Saddle North, expected by the end of this year, which will be based on the latest resource estimate. For more information, visit www.GTGoldCorp.ca.