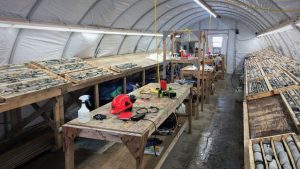 BRITISH COLUMBIA – GT Gold announced that it has started drilling at its wholly owned, 468-sq.-km Tatogga property in northern B.C., where a 10,000-metre diamond drill program is now underway.

The initial work will be focused on testing greenfield targets in the Quass Pass area, host to two anomalous trends, which lies 7 km south-west of the existing mineralization at the Saddle North and Saddle South areas.

GT has a COVID-19 plan in place, with specific mitigation measures. These include an on-site organizational response team, in addition to surveillance and monitoring.

GT Gold is now working on a preliminary economic assessment for Saddle North, expected by the end of this year, which will be based on the latest resource estimate.