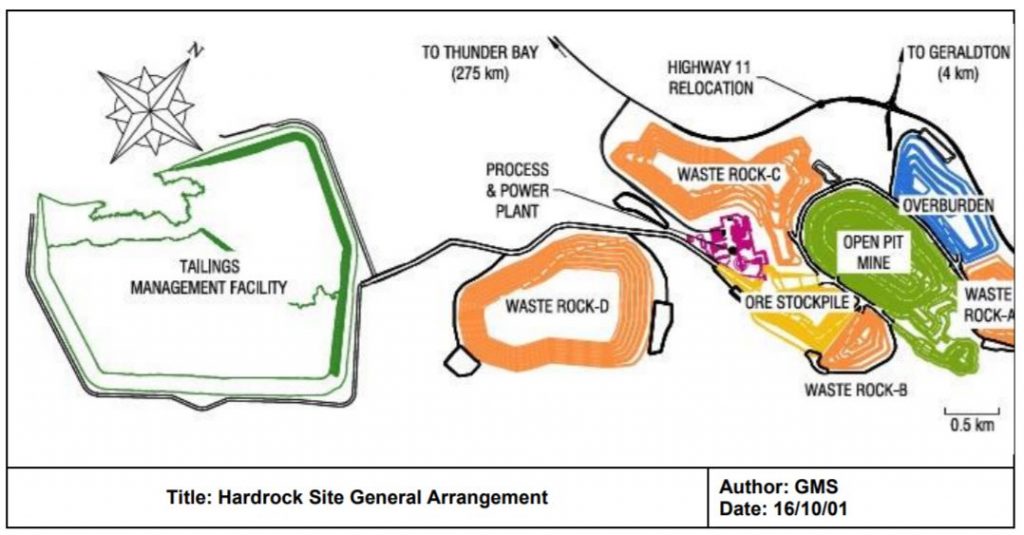 General arrangement for mining the Hardrock deposit in Ontario. (Image: Premier Gold Mines)[/caption] THUNDER BAY, Ont. – Premier Gold Mines has announced plans to spend up to $83 million (all U.S. dollars) for exploration and development of its eight properties in North America. Premier’s 2018 budget includes $38.8 million for direct exploration and development.  An additional $6.0 million is to be spent at the McCoy-Cove joint venture in Nevada, funded entirely by Barrick, and based on certain milestones and objectives, up to $37.9 million to be spent at the Greenstone gold joint venture in Ontario, funded entirely by Centerra Gold. The Greenstone project in the Geraldton-Beardmore Greenstone belt is in the permitting and detailed engineering stage for the eventual development of the Hardrock deposit. An open pit, underground mine and 27,000-t/d mill are being examined. The deposit contains 25.1 million indicated tonnes at 0.36 g/t gold (pit) and 3.91 g/t (underground). There are also 21.7 million inferred tonnes at 0.87 g/t (pit) and 3.57 g/t (underground). All together the deposit contains >4.0 million oz. of gold. Underground development is planned at the South Arturo mine and Cove project in Nevada. A starter pit at South Arturo will also be established. The Goldbanks and Rye properties in Nevada have a drilling budget of $3.4 million. Premier will follow up on high grade results – 245.27 g/t over 3.4 metres – at Goldbanks. Drilling will also take place at the Hasaga property in Ontario. Development initiatives at the Mercedes mine in Mexico include extending the underground workings and updating the resource estimates. Additional details are available at www.PremierGoldMines.com.