BRTISH COLUMBIA – GT Gold has released its final results from 2019  drilling at the Saddle South target located within the Tatogga project; […]
By Magda Gardner January 20, 2020 At 1:19 pm 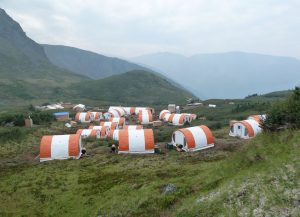 Exploration camp at Tatogga Credit: GT Gold[/caption] BRTISH COLUMBIA – GT Gold has released its final results from 2019  drilling at the Saddle South target located within the Tatogga project; only four holes were completed at this zone last year. Drill highlights include: All of the reported intercepts are from the first 210 metres down-hole. “The results from the four Saddle South drill holes, which were drilled primarily to aid our understanding of the geometry of this near-surface gold-silver system, serve to remind of the optionality this target offers to the development strategy of the overall project, as well as to the significant exploration potential across the Tatogga property,” Paul Harbidge, the company’s CEO, said in a release. Drilling to date has traced near-surface mineralization at Saddle South over 500 metres of strike, covering a width of 100 metres and down to 500 metres below surface. It remains open; the current limits of mineralization lie within a system with a total strike in excess of 1 km. The intercepts reported in the current release are from the central part of the Saddle South zone. The data collected from Saddle South this year will be used to form a preliminary geological model for the zone which will guide future resource estimation work. The zone was discovered in 2017 and is an epithermal gold-silver system. The company’s primary exploration focus this year was Saddle North, a high-grade copper-gold porphyry system with mineralization traced to date over 700 metres of strike, for 1,400 metres to 1,600 metres down plunge and across a thickness of 200 metres to 560 metres. A geological model for Saddle North is expected by the end of the first quarter. The 468 sq. km Tatogga project is located in B.C.’s Golden Triangle district. For more information, visit www.GTGoldCorp.ca.