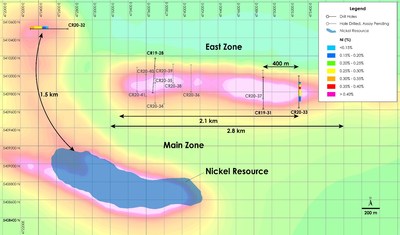 Crawford drill plan Credit: Canada Nickel[/caption] ONTARIO – Canada Nickel has released full assays for hole CR20-33 as well as nickel assays for hole CR20-32, which step out the East zone nickel-PGM mineralization by 400 metres to the east and extend the Main zone nickel mineralization by 1.5 km to the north, respectively. The drill highlights include 38 metres of 0.37% nickel and 0.17 g/t PGMs within a 315-metre interval of 0.25% nickel starting at 120 metres from hole CR20-33 as well as 243 metres of 0.25% nickel and 0.013% cobalt starting at 390 metres in hole CR20-32 (PGM assays for this intercept were reported on May 19). “We are very pleased with the latest significant nickel mineralization step-outs – extending our Main zone by 1.5 km and our East zone discovery by 400 metres,” Mark Selby, the company’s chairman and CEO, said in a release. “Importantly, this is the second of three holes on the East zone with a higher-grade interval (0.37% nickel over 38 metres) that also contained elevated palladium and platinum grades. Our latest drilling results further reinforce our belief that Crawford is one of the leading next generation nickel-cobalt sulphide and palladium projects.” Crawford currently features two known zones of nickel-cobalt-PGM mineralization: the Main and East zones. These latest results suggest a 3.2-km total strike of the Main zone, which remains open to the west, and extend the East zone, which lies within a 2.8-km long geophysical anomaly, by 400 metres, to 2.1 km of strike. Canada Nickel announced the discovery of the East zone on May 19 – initial assays reported earlier this month include 55 metres of 0.42% nickel and 0.2 g/t PGMs within a 256-metre interval grading 0.3% nickel and 0.05 g/t PGMs. The PGM-bearing zone at Crawford appears to lie at the geologic contact directly to the north of and parallel to the nickel-bearing structure. The company first discovered this zone in April – according to the company, it appears to span the entire length of the Crawford unit. For more information, visit www.CanadaNickel.com.