It’s usually difficult to find a seat at the commodities session on the opening day of the Prospectors and Developers Association of […]
By Alisha Hiyate March 2, 2020 At 1:21 pm 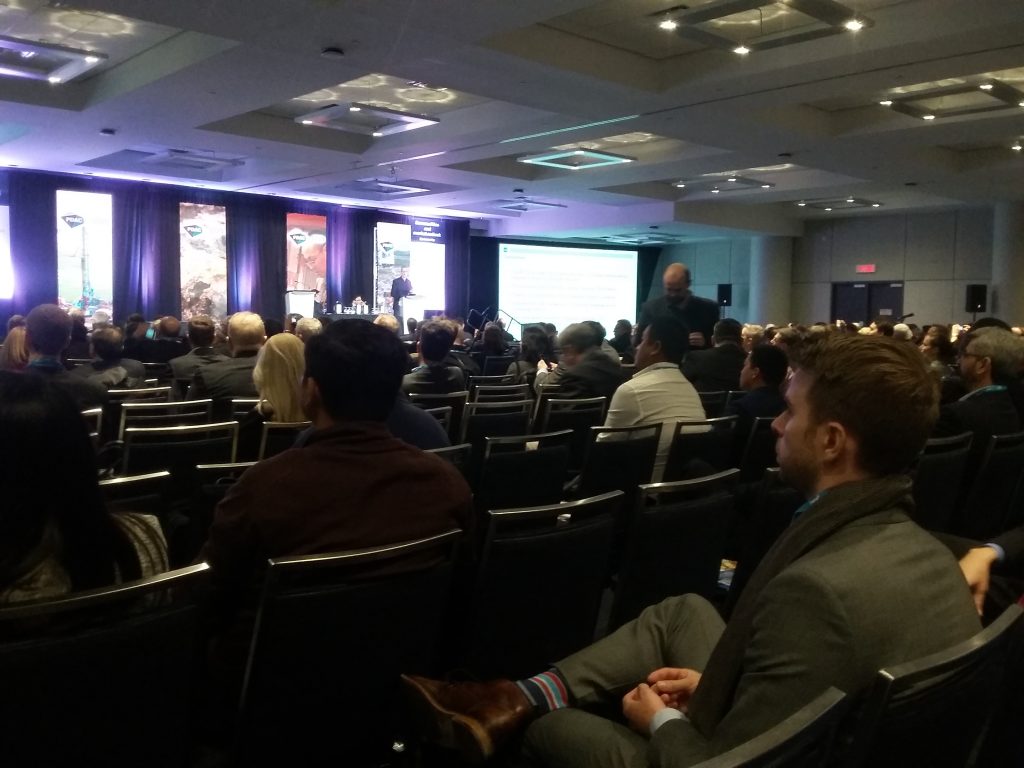 Paul Robinson, a director at CRU Group, speaks at the Prospectors and Developers Association of Canada convention in Toronto. Credit: Canadian Mining Journal Paul Robinson, a director at CRU Group, speaks at the Prospectors and Developers Association of Canada convention in Toronto. Credit: Canadian Mining Journal[/caption] It's usually difficult to find a seat at the commodities session on the opening day of the Prospectors and Developers Association of Canada (PDAC) convention held in early March in Toronto, but there was a noticeably smaller crowd at this year's Sunday afternoon talks. At the start of his talk on the outlook for metals and mining in 2020, Paul Robinson, a director at CRU Group, noted the unusually sparse attendance – and the reason why. “We can't not talk about Covid-19 – coronavirus,” Robinson said. “At the moment, there is no real change in global demand... Some travel is hit – you can see how empty this room is compared to normal, but we haven't got any sort of level of significant hit like we've seen in China and South Korea.” CRU Group is a London, U.K.-based company that specializes in commodities research, and Robinson shared some of CRU's insights into the current and coming drivers of change and uncertainty in the mining and metals sector – including Covid-19. As an example of the virus's effects in China, Robinson noted that CRU employees in Beijing have been working from home for the last three and a half weeks – self-isolating, ordering food in, and also not buying consumer goods or booking holidays. Empty streets in the normally bustling capital of China show that they're not the only ones. “The longer this continues, the bigger the impact on the Chinese economy – and it's starting to have an impact on the global economy,” Robinson said. Important factors that will determine how big the impact will be include: how the virus is contained over next three to four weeks, how consumers react, and the type of stimulus the Chinese government applies to counter the negative economic effects of the virus. “A lot about the second half of 2020 depends on the stimulus – there will definitely be a stimulus in China, that is guaranteed.” If the government stimulus is aimed at encouraging consumer spending and subsidizing the green economy, copper, cobalt and nickel would see a boost, and things could start to pick up in the second half of the year. If that doesn't work, and the government reverts to “old school” infrastructure -type stimulus, it would be good for iron ore, steel and copper, but the impact would be “far less sustainable,” Robinson says. CRU's current forecast for a basket of 38 commodities sees a 5% price decline for 2020 overall. Palladium is expected to do the best this year, with prices increasing at least 15% over 2019, and lithium is expected to perform the worst, with prices falling at least 15%. There is downside risk to the forecasts as they assume that the coronavirus effects will largely be contained to China and that the country will apply effective economic stimulus. In December 2019, CRU's view was that the commodity price cycle was at a bottom; however, there's now less certainty about metals demand, Robinson said. “As long as the rest of the world isn't affected this year (by coronavirus) we should see a return to positive growth... But we need to see a return to sustainable demand growth before we're going to see the bottom of the price cycle.” Because the larger mining companies are currently in a positive free cash flow position after having tackled cost inflation in the industry over 2013-2018, they are well positioned to control their own destiny – and can choose how to best deploy their cash, whether through share buybacks, M&A or other investment. However, there is a risk that over the longer term, investors who are looking for “cleaner,” low-carbon investments may start to write off the mining industry entirely. “That's not a challenge for us today because we're in a positive free cash flow territory and there's not a lot of debt being raised,” he said. “But if we don't start to address that challenge now and why that thinking is wrong – if you don't invest in base metals mining now, there isn't going to be the metals and minerals to actually have that less carbonized world – when we need the money it's not going to be there.” Robinson also touched on another growing theme – the fair distribution of wealth from mining. “We have to get on top of fair wealth distribution. And you can add two challenges from technology that are coming – automation costs jobs and remote working costs (local) salaries. That's not a bad thing, but if you then also try to go forward with local partners on existing mine distribution models on existing head count models, there's going to be a gap in expectations. So in a mine that employs 50% less staff and has them all remote working 500 km away, how do I make sure that the local communities (benefit)?” PDAC 2020 continues through Wednesday, Mar. 4 at the Metro Toronto Convention Centre.