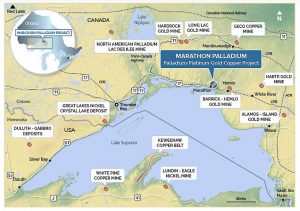 ONTARIO – Generation Mining has increased its platinum group metals (PGM) and copper recovery projections for the Marathon deposit in northwestern Ontario, which will be incorporated into an upcoming feasibility study for the project.

These latest numbers represent improvements over the recoveries from January’s PEA for Marathon, which assumes 82.9%, 74.5% and 90% recoveries for palladium, platinum and copper, respectively.

“We are extremely pleased with the Phase 1 metallurgical testing program,” Jamie Levy, the company’s president and CEO, said in a release. “A 4% improvement in recovery for palladium, a 3% improvement for copper, and a 10% (improvement in) recovery for platinum is a direct financial benefit to the Marathon project.”

Levy added that this latest metallurgical program also considered the latest flotation technology, such as the Woodgrove Direct Flotation Reactor (DFR), which could decrease the initial concentrator capital costs.

A follow-up second phase testing program has now started – this work is focused on validating the processing flowsheet for Marathon and producing a final concentrate, which would be used for marketing. These efforts are expected to continue into the fourth quarter of this year, but are not anticipated to have an impact on the progress of the Marathon feasibility study, which is expected in the first quarter of 2021.

In July 2019, Generation Mining closed its acquisition of a 51% initial interest in the Marathon property from Sibanye-Stillwater and entered into a joint-venture agreement with Sibanye, which allows it to increase its interest in the project to 80% by spending $10 million and completing a preliminary economic assessment (PEA) within four years. Sibanye may then re-acquire a 31% interest in the project, bringing its total to 51%, by paying 31% of the capital cost to the joint venture upon a production decision.