ONTARIO – Cameco has announced that it is resuming production at the uranium hexafluoride (UF6) plant within its Port Hope conversion facility […]
By Magda Gardner May 11, 2020 At 3:37 pm 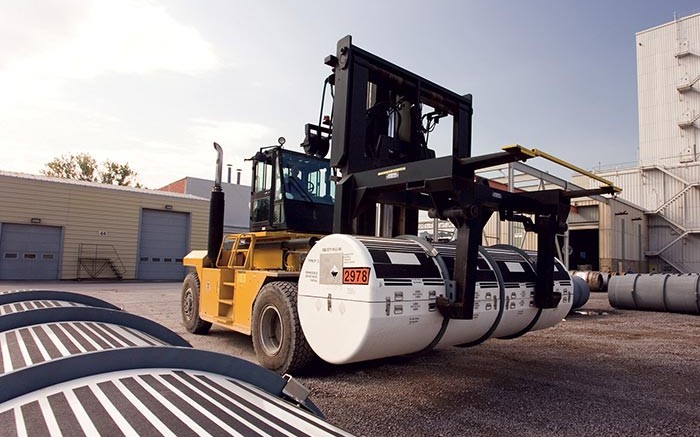 A uranium hexafluoride cylinder at Cameco's conversion facility in Port Hope Credit: Cameco[/caption] ONTARIO – Cameco has announced that it is resuming production at the uranium hexafluoride (UF6) plant within its Port Hope conversion facility and its Blind River refinery in Ontario. The two operations are planned to restart the week of May 18 and ramp up to full production by the week of May 25. On Apr. 8, the company announced that these two facilities were being placed into a temporary safe shutdown mode and that maintenance work scheduled for this summer would be advanced where possible. According to the company, this decision was driven largely by the personnel requirements for the complex UF6 plant, where continuous processes run uninterrupted. As a result, production at the Blind River refinery, which produces UO3 for the UF6 plant at Port Hope, was also suspended. Throughout this downtime, the company’s other operations in Ontario have continued to operate. Cameco’s Cigar Lake mine in Saskatchewan remains in a state of care and maintenance due to the challenges that the COVID-19 pandemic presents to communities in the northern part of the province. Towards the end of March, Cigar Lake as well as Orano’s McClean Lake mill were ramped down. “The provinces and communities where we operate are certainly not out of the woods when it comes to this global pandemic, and we must remain vigilant in how we manage our activities during these challenging times,” Tim Gitzel, the company’s president and CEO, said in a release. “However, we are confident that we can maintain the required roster of qualified operators to run the UF6 plant going forward, enabling us to carefully bring the plant and the UO3 refinery back into production.” On Apr. 13, Cameco withdrew its production guidance for this year, Cigar Lake was previously expected to generate 9 million lb. of U3O8 for the company in 2020. For more information, visit www.Cameco.com.