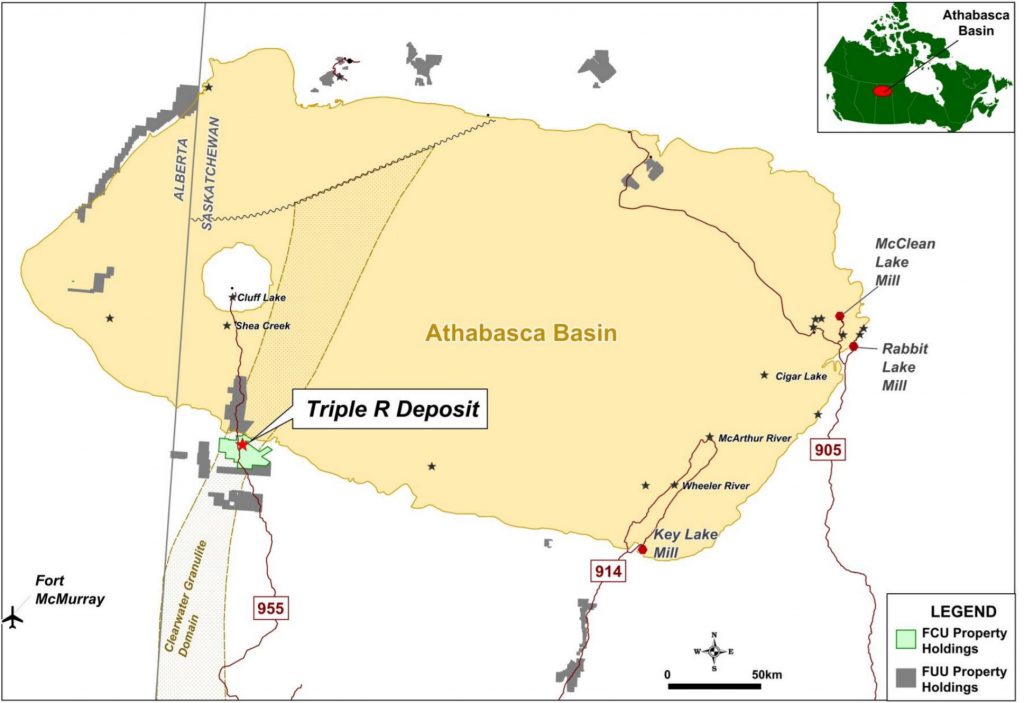 Location of Fission’s Triple R deposit and other uranium projects in the Athabasca Basin. (Image: Fission Uranium)[/caption] SASKATCHEWAN – Fusion Uranium, headquartered in  Kelowna, B.C., is preparing to start a $9.4-million winter work program at its Patterson Lake South property in the Athabasca Basin. Roscoe Postle Associates will be the lead consultant for the study. An eight-hole winter drilling program will expand the high grade R1515W zone and the results will form part of a pre-feasibility study. R1515W is the farthest zone yet discovered on the 3.2-km trend as exploration pushes westward from the Triple R deposit. One of the promising holes in the zone intersected 128.0 metres of total composite mineralization including intervals such as 7.0 metres at 6.90% uranium oxide, 14.5 metres at 3.39%, and 7.0 metres at 6.35%. Another 23 holes will be drilled to upgrade the resources of the Triple R deposit, notably expanding the tonnage of the indicated resource. Currently, the resource estimate is 2.0 million indicated tonnes grading 1.83% U3O8 for 81.1 million lb. of uranium oxide and 750,000 inferred tonnes at 1.57% for 45.1 million lb. Fission is also planning geotechnical and hydrogeological drilling. The second phase of metallurgical tests is in progress. The company is also collecting data for the baseline environmental study and engaging with the local First Nations, communities and governments. The PFS is to be completed this year. Visit www.FissionUranium.com for updates.