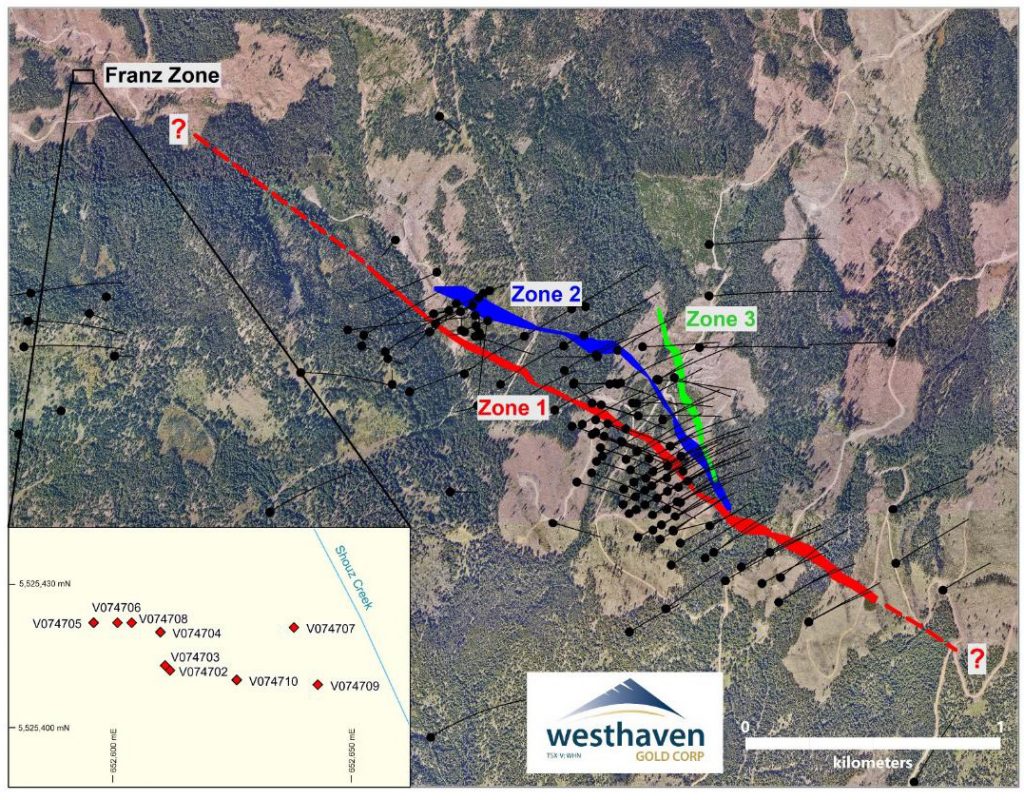 Shovelnose map. Credit: Westhaven Gold[/caption] Westhaven Gold has released high-grade grab sample assays from the recently discovered Franz zone at its 126.2-sq.-km Shovelnose gold project, 30 km south of Merritt, B.C., in the Spences Bridge gold belt. Assay results include a 2.3-kg outcrop sample grading 51.1 g/t gold and 165 g/t silver; a 2.3-kg outcrop sample grading 4.19 g/t gold and 52.5 g/t silver; and a 1.3-kg float sample grading 34.9 g/t gold and 120 g/t silver. Grab samples of outcrop and float were taken over an east-west area of 50 metres by 12 metres. The two highest grade samples were taken 5 metres apart in the western portion of the sampled area. In a release, Westhaven Gold president and CEO Gareth Thomas said the Franz zone, a quartz vein outcrop, is only 2.8 km away from a high-grade discovery at the project's South zone. “This demonstrates we are dealing with a large and robust mineralized system and it is not just limited to the South zone,” Thomas said. “The Franz zone was discovered just over a week ago, so we don’t yet know the extent, but this is the most significant mineralized zone discovered on surface at Shovelnose.” “This outcrop may represent the northwestward continuation of Vein Zone 1, suggesting a total strike length of at least 3.7 kilometres for the zone,” added Peter Fischl, Westhaven's exploration manager. “Drilling will be required to confirm this strike continuity. Drilling will commence at Franz shortly.” The company is already conducting a 30,000-metre drill program at Shovelnose. The South zone at the project currently extends for about 1.3 km of strike and is open to the southeast; the company has also discovered two separate, sub-parallel high-grade zones: Vein zones 2 and 3. The project is a low-sulphidation epithermal gold deposit. For more information, visit www.westhavengold.com.