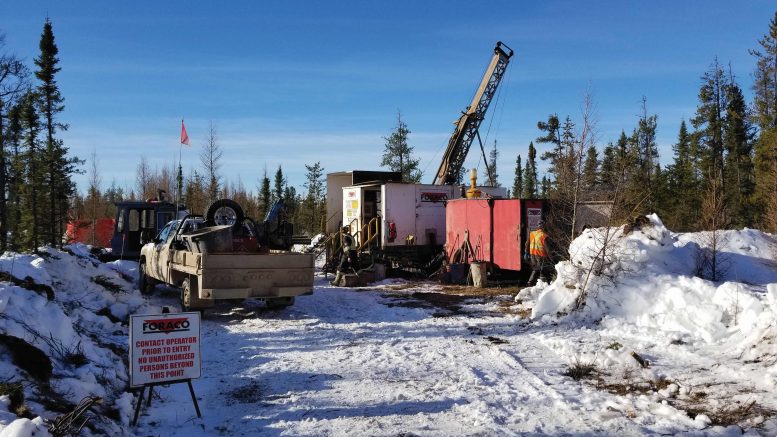 Drilling at Pine Point Credit: Osisko Metals[/caption] NORTHWEST TERRITORIES – A preliminary economic assessment (PEA) for Osisko Metals’ wholly owned Pine Point project outlines an 11,250 t/d open-pit and underground operation, mining 47 small open pits and eight high-grade shallow underground deposits. The proposed 10-year mine would produce an average of 327 million lb. of zinc and 143 million lb. of lead annually at estimated cash costs of US67¢ per lb. of zinc-equivalent (including smelting, transport and royalties). With a total initial capital cost of $555.7 million, the after-tax net present value estimate for the project, at an 8% discount rate, stands at $500 million with a 29.6% internal rate of return based on estimated life-of-mine zinc and lead prices of US$1.15 per lb. and US95¢ per lb., respectively. “On a zinc-only basis, Pine Point could potentially, if it entered into production, become a low-cost zinc-lead producer ranking fourth largest in the Americas and ninth in the world, yielding an exceptionally clean and high-grade zinc concentrate,” Robert Wares, the company’s executive chairman and CEO, said in a release. “With several deposits open, I am particularly excited to continue exploring and expanding the resource base across the project.” Jeff Hussey, the company’s president and COO, added that the early-stage study considers historical data and incorporates improvements in mining technology since the 1988 closure of the Pine Point operation with more optimization work ahead. “While the PEA already outlines a base-case for a potential top-ten zinc producer of high-quality clean concentrate, we foresee several areas for improvement as we continue to optimize these great initial economic metrics and move towards initiating a feasibility study.” The combined open-pit and underground operation would produce a filtered flotation concentrate on site, trucked to Hay River (over a distance of 80 km) and then loaded onto rail cars. Based on last year’s analysis of the zinc and lead concentrate samples, Osisko does not expect any impurities in these products. The zinc concentrates will likely be smelted in North America whereas the lead concentrates would be sold into the Asian contract markets. Tailings would be disposed into historical open pits at the site and then covered with layers of waste rock. Along with the PEA, Osisko released an updated resource estimate for Pine Point, with indicated resources of 12.9 million tonnes at 4.56% zinc and 1.73% lead (6.29% zinc-equivalent) and inferred reources of 37.6 million tonnes at 4.89% zinc and 1.91% lead (6.8% zinc-equivalent). According to the company, 80% of these resources are pit-constrained; the open-pit component was estimated using a 1.85% zinc-equivalent to 2.05% zinc-equivalent cut-off whereas the underground portion was derived using a 5% zinc-equivalent cut-off. The updated resource converts approximately 25.5% of the global resource to the indicated category. The previous resource outlined 52.4 million inferred tonnes grading 4.64% zinc and 1.83% lead 6.47% zinc-equivalent), derived using varying cut-off grades. A number of the existing deposits remain open and drilling to date was focused on upgrading resources within known areas of mineralization – additional exploration work is planned, aimed at expanding the pit boundaries. The 466-sq.-km Pine Point project previously produced 64 million tonnes grading 7% zinc and 3.1% lead between 1964 and 1987. For more information, visit www.OsiskoMetals.com.