As developer Sabina Gold and Silver prepares to release a feasibility study on its Goose mine gold project in Nunavut in the […]
By Canadian Mining Journal Staff December 8, 2020 At 1:00 pm 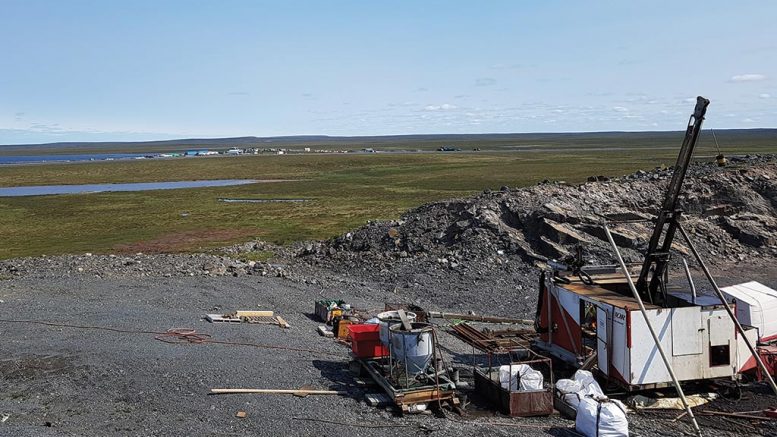 As developer Sabina Gold and Silver prepares to release a feasibility study on its Goose mine gold project in Nunavut in the first quarter, the company has also released eight final drillhole assays from its 8,000-metre program at the Goose property. These results appear to expand existing areas of mineralization and suggest new gold zones.

The drill highlights include 43.7 metres of 3.74 g/t gold from the Umwelt hinge target, where three holes tested approximately 300 metres of plunge of an iron formation. All three of these holes hit mineralization over ‘significant widths’ and Sabina sees potential for resource growth in this area.

At Llama Extension, northwest of Umwelt, three holes tested parts of a 500-metre trend to support an initial resource in the area. Most recent drill intercepts include 9.2 metres of 3.75 g/t gold.

The Hook target, a potential bridge zone between the Goose Main and Nuvuyak deposits that covers 600 metres of strike, returned 13.7 metres of 1.9 g/t gold.

Exploration results released earlier this year suggest high grades within the V2 zone below the proposed Umwelt pit, with an updated reserve pending, to mine this high-grade material earlier on in the mine life.

“At Umwelt, drilling confirmed our team’s hypothesis of a high-grade underground corridor with the definition of the V2 zone, which can provide positive impacts to our project economics,” Bruce McLeod, Sabina’s president and CEO, said in a release, commenting on this year’s exploration successes. “Additional resource style drill holes at the Llama Extension target as well as internal work has enabled resource modelling for new inferred resources at both Llama Extension and Nuvuyak zones. These two oncoming resources have the potential to form the foundation for future design of two new underground mines at the Goose site.”

The company has also completed an airborne geophysical survey over the Goose, George and Del properties. The resulting data indicates conductors centred on the Llama, Umwelt and Goose Main deposits. A second phase of data modelling is now underway, to help with next year’s exploration targeting at the three properties.

Sabina Gold and Silver wholly owns the Back River gold project in Nunavut, where a 2015 feasibility outlined a 3,000 t/d, 12-year mine, producing approximately 200,000 oz. of gold annually from three pits and one underground mine at Goose.